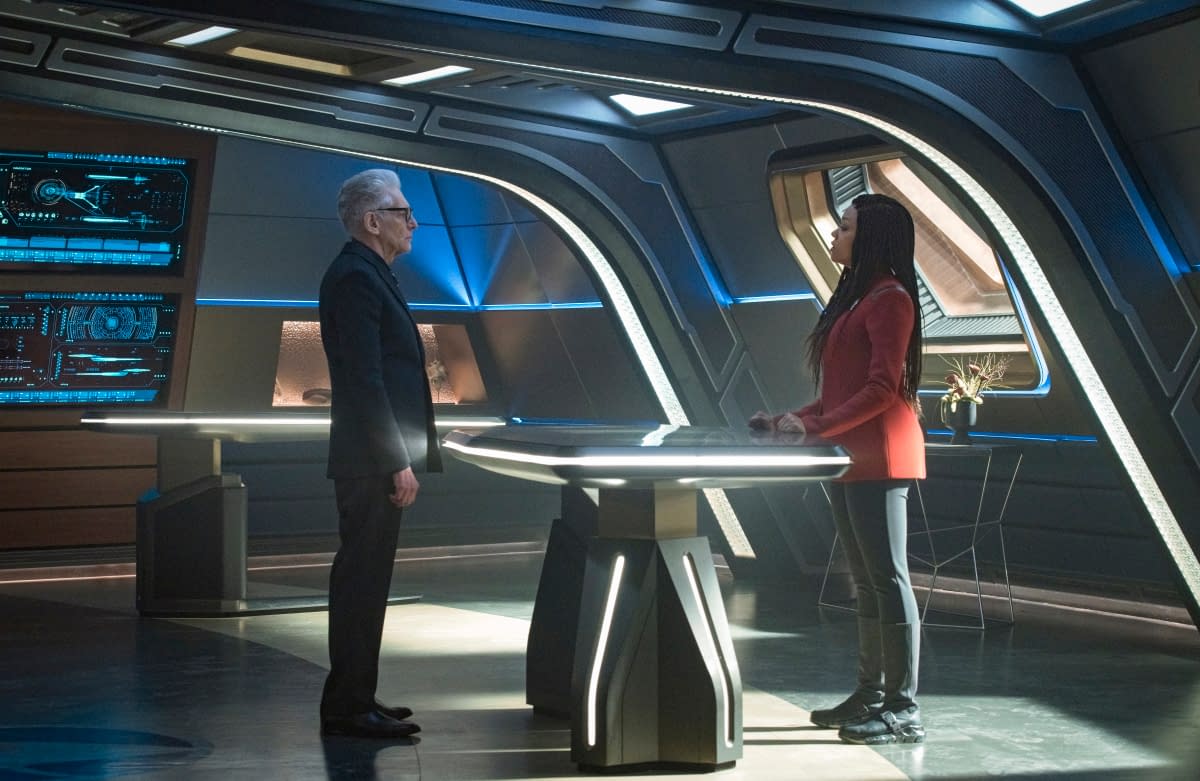 Some of the cliches about Star Trek are totally true. When haters try to say that the most common Star Trek episodes are all about space diplomacy or long-drawn-out debates about science fiction ethics, true believers know that’s actually a huge compliment. And in this way, the seventh episode of Star Trek: Discovery Season 4 — “…But to Connect” — is one of the best examples of a Star Trek episode, ever. Not only do we get big, galaxy-defining space politics, but also a unique debate about the nature of sentience and what to do when it’s in a form we’ve never seen before.

Along the way, this episode references a ton of Trekkie hits, from The Next Generation to Discovery’s own recent history, and the very first rogue Trek AI, ever, this one checks all the boxes. Here’s every Easter egg and reference we caught in Discovery Season 4, Episode 7, “..But to Connect.”

Stamets mentions the big meeting at Federation HQ will include “all four quadrants.” This means people from the Alpha, Beta, Delta, and Gamma quadrants will be present. This raises a few questions. First, are folks still using the Bajoran wormhole (from Deep Space Nine) to travel from the Gamma Quadrant to the Alpha Quadrant? Second, who are the representatives from the Delta Quadrant, and who did they get there? Presumably, Federation HQ is in the Alpha Quadrant, meaning, for some of these representatives, it was a pretty long haul! Then again, President Rillick later mentions that some delegates are “remote.” So, maybe those Delta Quadrant reps are on the 32nd Century version of Zoom.

“We both have our duties to attend to”

When Kovich tells Burnham he’s taking over the investigation of Zora, he mentions that “we both have our duties to attend to.” This could be a reference to something Kirk says to Bones in The Wrath of Khan, “Spare me your notions of poetry, please. We all have our assigned duties.”

Returning after her initial appearance in Season 3’s “People of Earth” is General Nyode, once again played by Phumzile Sitole. Last time, Ndoye was a Captain but seems to have been promoted. She also mentions to Burnham that she no longer represents just Earth, but Titan, too, which again, references a peace deal forged by Saru and Burnham in Season 3.

“Your sole interaction with a sentient AI was Control”

Kovich points out that everyone on Discovery has a bias against AI because they were royally screwed over by the AI known as Control way back in Season 2. For the most part, this is totally true. However, Zora’s sentience has been emerging since Season 2, also, starting with the moment when Discovery raised its own shields to prevent it from being destroyed in “Such Sweet Sorrow.” That said, Control did try to kill everyone on the ship as well as wipe out all sentient life in the universe, so, the bias is somewhat understandable.

In both his initial conversation with Burnham and later, his long analysis with Stamets and Adira, Kovich mention that there are “regulation against” a starship having a “fully integrated artificial unit,” and also says, “there’s a proscription against a fully sentient AI being fully integrated into Starfleet systems.”

This seems to reference a few things at the same time: First, Kovich is clearly alluding to the events of the TOS episode “The Ultimate Computer,” in which the M5 computer was given full control of the Enterprise, resulting in a total catastrophe. Second, the existence of the holographic Doctor from Voyager would seem to run counter to this notion…however, the Doctor developed the ability to leave Voyager, making him “not fully integrated” into the ship’s system. Right?

Throughout the episode, there are perhaps countless different alien species present for this super-important meeting about the DMA. Here’s a quick list of ones we spotted upon second and third viewings of the episode

Burnham presents a metaphor about Denobulan blood worms to the assembled governments. We don’t see any Denobulans here, but this is a clear shout-out to Dr. Phlox a Denobulan doctor, from Star Trek: Enterprise, who cared for leeches, worms, and all sorts of other loveable creepy crawlies on the good-old NX-01.

Tarka’s plan to destroy the DMA involves an isolytic explosion. This references a weapon used by the Son’a in Star Trek: Insurrection, which, as mentioned at that time, were banned by the second Khitomer accords. President Rillick doubles down on this assertion, indicating the rules of the Khitomer accords seem to have been held for at least 800 years or so.

Zora is in a form you’ve never encountered…

Gray points out that “as a Synth” he’s in a similar position to Zora, in a new form. On top of being an amazing metaphor against all sorts of prejudices, this also references the fact that people accept Gray’s Synth body the same way they would accept a “biological” body. This also echoes some of the themes from Picard Season 1, in which an overall ban on Synths was lifted by the end of the season, and Jean-Luc himself became a Synth.

What about the Klingons?

Because Book wants to make an emotional decision to stop the DMA, he asks Burnham about her rash behavior when she accidentally started the Klingon War, since, at that time, she’d assumed the Klingons had killed both her parents. Burnham says she had “an intrinsic knowledge of Klingon culture,” which is a little bit of an exaggeration. In truth, in “The Vulcan Hello,” Burnham asked her adoptive father, Sarek, what to do about the Klingons, and he recommended that Starfleet not show weakness.

Also, what about the Klingons? In the shiny new future of the 32nd Century, we’ve seen or heard from most of the major Star Trek alien species, but we haven’t heard a peep from the contemporary versions of the Klingons. With the DMA roaming around, it’s a very good day to die, so you’d think they would have shown up for this big vote, but…no?

Although some of us fans thought that maybe Tarka’s weird thing on the back of his neck (glimpsed in Episode 5) proved he was possessed by one of those parasite aliens from the TNG banger, “Conspiracy,” it turns out that’s not the case at all! Instead, Tarka’s scar is the result of having been enslaved by the Emerald Chain. Book mentions “I got rid of my scar the second I could,” referencing the time he spent in an Emerald Chain forced-labor camp in the Season 3 episode, “Scavengers.”

When Tarka tells Book that he knows of another universe in which there was “no war, no Burn, no Emerald Chain,” Book wonders if it’s the Mirror Universe. Tarka scoffs at this, noting that there are all kinds of possibilities for parallel realities. To do this he paraphrases something Data said in the TNG episode “Parallels”; all matter in the universe resonates on a quantum level with a unique signature. This was echoed by Michael Burnham in the Discovery Season 1 episode, “Despite Yourself.”

Does Zora dream of electric sheep?

Kovich points out that generally speaking, AIs can’t dream, “unless they’ve been programmed to.” This seems like a double reference to the famous Philip K. Dick novel Do Androids Dream of Electric Sheep? (the basis for Blade Runner) but also, The Next Generation episode, “Birthright Part 1,” in which Data discovers he has a “dreaming” program, which was built into his positronic matrix by his father, Dr. Noonien Soong. Kovich probably knows about this, since he seems to be a borderline expert on the history of AI in Star Trek. In fact, he even says so at the top of the episode, telling Captain Burnham that his background includes, “a specialty in artificial sentience and intelligence.”

Adria points out that Zora is like “an entirely new lifeform,” because Zora doesn’t fit the strict definition of an AI. This outcome is similar to the way Picard defended Data’s rights in the TNG episode “The Measure of a Man.” In that episode, Picard said famously, that Starfleet was founded to seek out new life, and “there it sits.” In this way, Zora is the new Data.

In another sideways reference to Data, Zora agrees to become a member of Starfleet and is granted the title “Specialist.” This pseudo-rank was previously sported by Burnham in Season 1 of Discovery when she rejoined Starfleet after having been Court Martialed. The idea that Zora is now part of Starfleet also throws new light on the Short Treks episode “Calypso.” In that episode, Zora made it clear she was ordered to hold position by her Captain. It seems clear now, that that Captain will be Burnham, and that when Zora meets Craft in the distant future, she’s probably acting as a member of Starfleet.

It’s unclear if Discovery Season 4 will get to that point. In the meantime, there are much bigger Dark Matter fish to fry. After this, Discovery will take a mid-season break, and return on February 11, 2022, for the rest of Season 4.

Loki Season 2: The Timekeepers Are Back in New Trailer
Pizza Tower Is the Best New Wario Land Game We’ll Probably Ever Get
Snowpiercer, Infinity Train and Other Erased Streaming Series You Can No Longer Watch
Gunther’s Millions: The True Story Behind Netflix’s Rich Dog Docuseries
Marvel Studios’ Ant-Man and The Wasp: Quantumania | Before