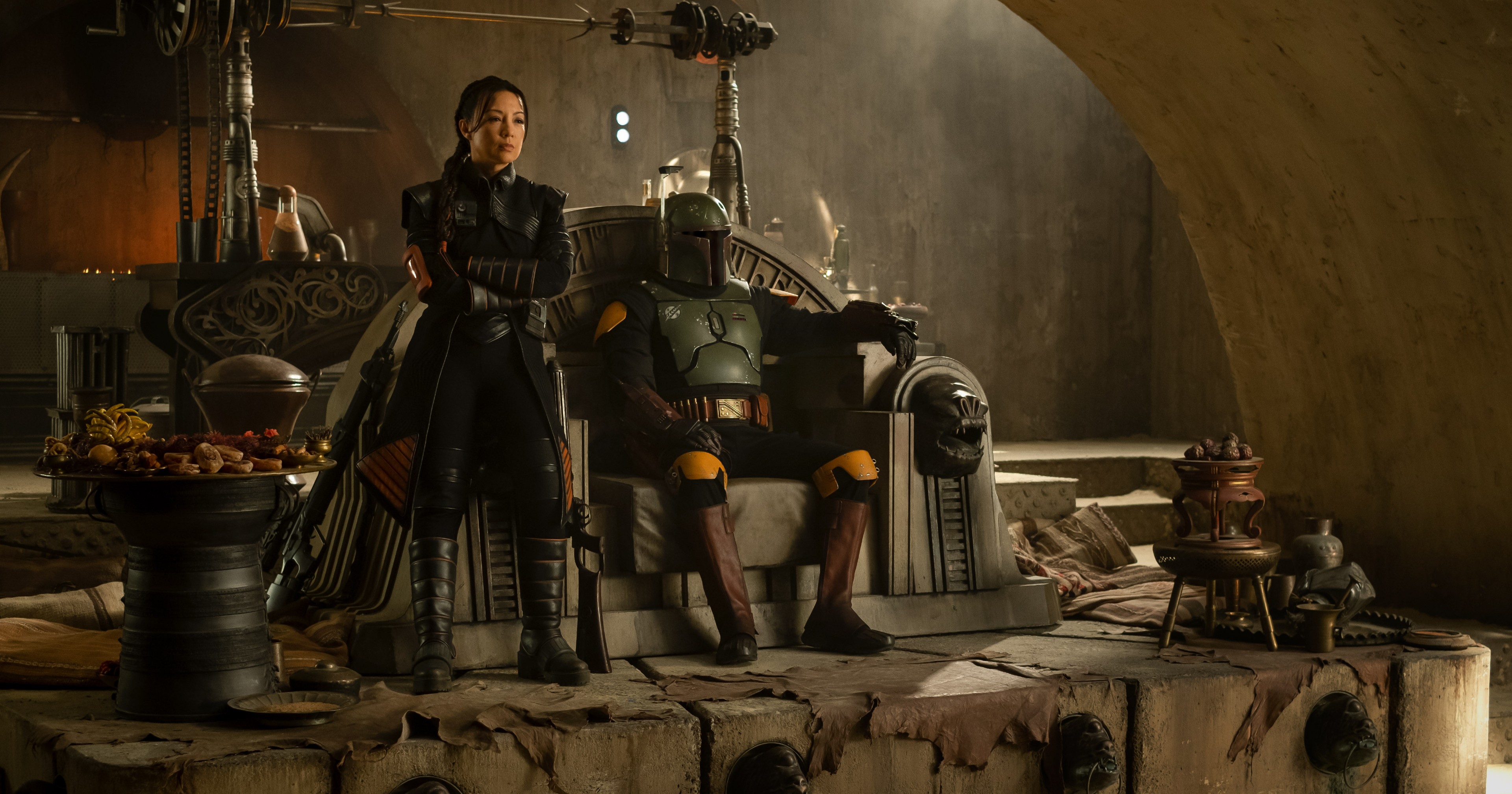 The Book of Boba Fett returns to Tatooine and a lot of familiar Star Wars sights in its premiere episode, “Stranger in a Strange Land.” As a loose spinoff of The Mandalorian, it’s possible Fett and his right-hand killer Fennec Shand will get involved in wider galactic politics going forward. But, for now, we revisit several different movie settings in a reference-filled episode.

We should all know him by now, but in case you missed the Prequel Trilogy and The Mandalorian season 2, that’s incredibly charismatic actor Temuera Morrison playing Boba Fett in the new Disney+ series. Morrison actually made his Star Wars debut in 2002 in Attack of the Clones in which he played Boba’s father, Jango Fett.

Boba Fett isn’t the only character who is back from the dead. Ming-Na Wen is back as assassin Fennec Shand, who was brought back from the brink of death after being fatally wounded in the first season of The Mandalorian. With a new lease on life, Fennec now serves as Boba’s right hand as he builds his criminal empire.

The droid who assists Boba and Fennec is 8D8, formerly Jabba’s torture droid seen in Return of the Jedi. In The Book of Boba Fett, he’s voiced by Matt Berry, who you’ll recognize as the eternally salacious Laszlo Cravensworth from What We Do in the Shadows.

Attack of the Clones Flashbacks

– While healing inside a bacta tank, Boba remembers his home planet of Kamino, which was first introduced in Attack of the Clones. Remember, Boba is an unaltered clone of his father, Jango Fett, which means he doesn’t age as rapidly as the other clones. His lifespan is the same as naturally-born human’s.

– Kamino was known as the home of the best cloning scientists in the galaxy, which is why the Republic hired them to build an artificially grown army to fight the Separatists in the Clone Wars. By the time of The Book of Boba Fett, the cloning facilities are gone, destroyed by the Empire during the events of The Bad Batch animated series.

– Boba’s first trauma was the death of his father on Geonosis. He was beheaded by Mace Windu during the very first battle of the Clone Wars. You can see a flashback to him holding his father’s helmet in the combat arena.

The sarlacc monster and Fett have a long history. Originally, Fett was considered dead after being thrown into its maw in Return of the Jedi. However, several books and comics now considered part of the non-canon Legends continuity showed how he surviving well past his apparent digestion. The Book of Boba Fett finally gives us a canon version of Boba’s escape, which you can read more about here.

Boba uses a bacta tank to treat his injuries. While the breathing apparatus may be reminiscent of Darth Vader, this healing substance is more closely associated with Luke Skywalker, who needed a bit of bacta healing after his fight with the wampa in The Empire Strikes Back. Bacta is a valuable resource in the galaxy, so, naturally, sometimes people fight over it.

The band at the seedy Mos Espa establishment, playing a remix of the famous A New Hope cantina music, is the Max Rebo Band from Return of the Jedi. Guess they found a new job after Jabba’s death. That said, this is a much smaller band than the 12-person musical group that played at Jabba’s Palace. Looks like they lost a few folks on that barge, including their vocalists…

– The Tatooine settlement of Mos Espa is a previously established location (and not the same as the town Luke visits in A New Hope, Mos Eisley). In fact, it’s Anakin Skywalker’s hometown, the site of much of the Tatooine portion of The Phantom Menace, including the pod race.

– While there were no droids allowed in the Mos Eisley cantina, Madam Garsa Fwip’s cantina uses astromechs to carry drinks just like Jabba forced R2-D2 to do in Return of the Jedi.

There has been some speculation that the Tusken leader bears a resemblance to A’Sharad Hett, a Force-sensitive human raised by Tuskens who grew up to become a powerful Jedi Master and later a dreaded Dark Lord of the Sith who ruled a new Galactic Empire more than a century after the fall of Emperor Palpatine.

Krayt appeared in a wide range of Star Wars tie-in media in the ’90s and 2000s, but is no longer canon by Disney standards. While the Disney era TV shows have pulled in other elements from the Legends canon, such as the dark troopers, there’s really no evidence any of the Tuskens in The Book of Boba Fett have anything to do with Hett/Krayt. For now, it seems like wishful thinking at best.

One interesting tidbit about Hett is that he’s one of the few characters who has ever offered a look underneath the mask of a Tusken Raider. In this case, Hett just has a heavily-tattooed human face since he was taken in by a Tusken tribe and is not actually of their bloodline. The true face of the Tusken Raiders remains largely a mystery to this day.

– Madam Fwip, mentioned above, is Jennifer Beals. You might recognize her from The L Word or Flashdance.

– Jabba’s Gamorrean guards were significant background aliens in Return of the Jedi. Since then, these big green pig guys have mostly been typecast as brawlers.

– Another Original Trilogy species, reptilian Trandoshans are often bounty hunters like their first representative Bossk from The Empire Strikes Back. In this case, they’re represented by Dokk Strassi, the leader of a Trandoshan gang on Tatooine and one of Boba’s former bounty hunting clients. Dokk is played by none other than director and showrunner Robert Rodriguez himself!

– The Aqualish who pays tribute to Boba Fett is named Garfalaquox and is played by Daniel Lowin, one of Din Djarin’s doubles on The Mandalorian.

– Although this new one is a different color, the fellow Boba tries to help escape from the Tusken camp is a Rodian like Greedo who shot at Han Solo second (or maybe first) in A New Hope.

– It wouldn’t be Tatooine without Jawas, the little scavengers who steal Boba’s armor in the same way they kidnapped C-3PO and R2-D2 in A New Hope.

– Tusken Raiders are known for riding their bantha mounts in single file, seen here just as Obi-Wan Kenobi described it in A New Hope.

– That big Tusken doggo is called a massif.

“Stranger in a Strange Land” and Heinlein

Along with being a rather literal description of Boba’s plight, the episode’s title, “Stranger in a Strange Land,” has a science fiction pedigree of its own. The phrase is originally from the Bible, spoken by Moses in Exodus 2:22 and popularized by sci-fi master Robert A. Heinlein, who used it for the title of his seminal 1961 novel, which gave the English language the word “grok.”