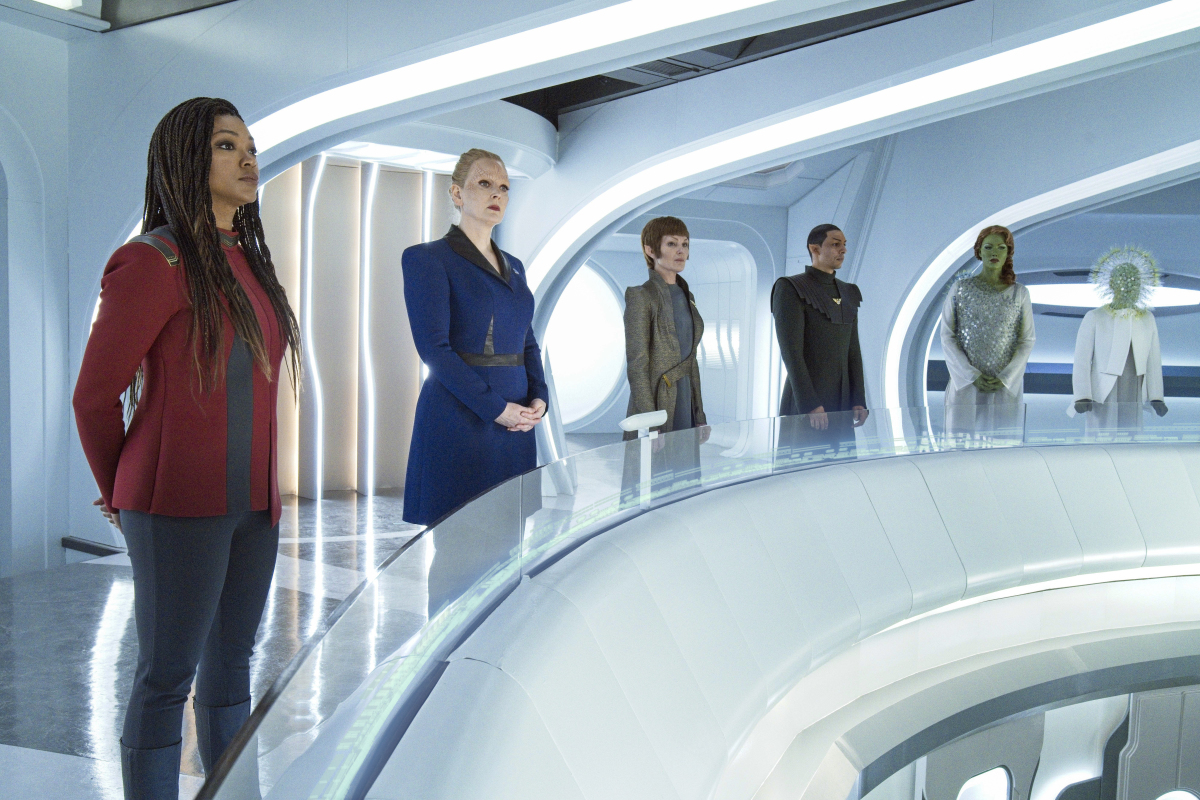 Star Trek: Discovery heads into its mid-season break with the strongest episode of Season 4 since its premiere, an hour that puts Burnham and Book at odds over foundational questions about the very things the Federation and Starfleet try to do and be. This is, not for nothing, my absolute favorite kind of Star Trek, a story about the necessary, inescapable conflicts between hope and pragmatism, philosophy and realism, politics and practicality.

The questions raised here, of diplomacy versus violence and whether the Federation should attack the DMA immediately in the hopes of wiping out something that’s already proved to be a dangerous threat or give the as-yet-unidentified Unknown Species 10-C a chance to speak for (and ostensibly explain) themselves first, these are the sort of age-old quandaries that have confronted all peoples since well before we went into the stars.

Does the potential for danger outweigh the prospect of peace? Should we judge others based on the possibility that they might do harm? Should we assume the worst of them based on a singular (admittedly, very bad) action? The lack of knowledge about the DMA itself makes clear answers on what should be done about undertaking a mission to destroy it difficult to discern, but the debate around the question makes for extremely compelling TV.

​​Sonequa ​​Martin-Green and David Ajala remain one of Discovery’s strongest duos, both from a romantic and a character perspective, and the show doesn’t ask either of them to back down from their principles just because they care for each other. Of course, Book desperately wants to believe that low rent Elon Musk’s magic weapon can save other planets from the DMA and prevent someone else from experiencing the pain that he now lives with every day. (And he’s certainly taken similar risks before for the chance at much lower rewards.)

Michael, for her part, has always been a poster child for Federation values, even when she’s had little reason to be, so it makes sense that she is the strongest advocate for the path that most clearly reflects those beliefs. (Even though was a moment where it seemed as though she might be swayed, if not by the specifics of Book’s argument, at least by the sincerity of his views, to change her mind.) But, at the end of the day, Burnham’s view of humanity and our duty to at least try to be the best versions of ourselves even when it’s hard wins out, because this is Star Trek and if the franchise has a north star, it is this – that offering a hand is more effective than pointing a gun, that we have as much to learn from the things that frighten us, that it costs us nothing to offer grace and acceptance to a stranger, that it is our ability to connect with others that can change the world.

Elsewhere, Discovery elegantly addresses the elephant of the potentially deadly sentient computer in the room, by drawing neat parallels between dealing with Zora’s increasingly complex consciousness and the question of what to do about Unknown Species 10-C and their already proven to be dangerous anomaly. The show ultimately embraces the grace with which we should always try to meet those who are different from us or whose motivations we don’t necessarily understand, but it gives fair hearing and consideration to the way that fear of the unknown often drives our choices. (There’s something painfully on the noise about the fact that the show’s designated Earth representative is so bellicose, but we probably deserve it.)

Stamets’ genuine anxiety over Zora’s sentience, having lived through the last time an evil AI tried to take over the ship, makes a lot of sense and it’s honestly a relief to hear someone finally bring all these very fair arguments up. (Though it might be nice to see someone other than Paul be the person who is a disbelieving pessimist sometimes, just saying.) But, on the whole Discovery’s explanation of Zora’s evolution – or, perhaps more accurately, its depiction of how much she genuinely cares about her crew – actually did a lot to reassure me that this is all going in a much more interesting direction than the “evil computer suddenly becomes existential threat” that I initially feared.

In the end, this is also the kind of Star Trek I love, the sort that not only tries to champion the best in others, but that acknowledges the hard work involved in the choice to do so. Being the people Michael exhorts us to be in her speech to the Assembly is both a choice and really hard work, something that we have to recommit ourselves to in each new day and after every setback. In many ways it’s easier to embrace the shoot first, ask questions later attitude that many Assembly members seem to want, which doesn’t ask us to think much beyond our own immediate need. (I mean, I’m not a scientist but ripping a possibly giant hole in subspace with a banned explosive substance seems…bad?)

If there’s a problem with this episode, it’s the return of Ruon Tarka, whose motivations are revealed to be as self-serving as you likely expected, though the twist that he’s from a parallel universe is at least something genuinely surprising. I’m unclear if I’m inclined to mistrust Tarka because he is so aggressively smarmy or because he’s so obviously working toward ends that likely have little to do with the Federation’s, but ugh. (Do we really beleive that all he’s trying to do is “get home”?)  People who make weapons out of banned substances are generally not good guys, is all I’m saying.

As for Book, I suppose it was inevitable that he would eventually do something dangerous and/or deeply insubordinate thanks to the crushing grief that he’s still struggling to process. All I can say is that at least this time he managed to get Grudge somewhere safe before he decided to once again fly his ship into what seems like certain death. (Sidebar: I’m glad we have very fancy cat carriers in the future…but, really? We’re still using plastic cat carriers in the 32nd century?) Watching him betray Michal’s trust in this way is heartbreaking, if vaguely understandable, especially because even if somehow nothing terrible happens as a result of all this, things can’t exactly go back to the way they were afterward.

We’ve got a month to wait to find out if Book and Tarka manage to destroy the anomaly and what precisely Unknown Species 10-C turns to be, and I’m going to spend it thinking about how much I loved the tiny moment between Saru and President T’Rina, because their little weirdo friendship is adorable and exactly the sort of thing I want to see more of on this show.

The Last of Us: Are the Infected Actually Zombies?
Dead Space Remake: Where to Find Every Schematic
The Last of Us: What Happens to Bill and Frank In the Game?
Junji Ito Maniac: Ranking the Stories From Creepy to Downright Terrifying
MCU Villain Redemption Arcs Ranked from Worst to Best