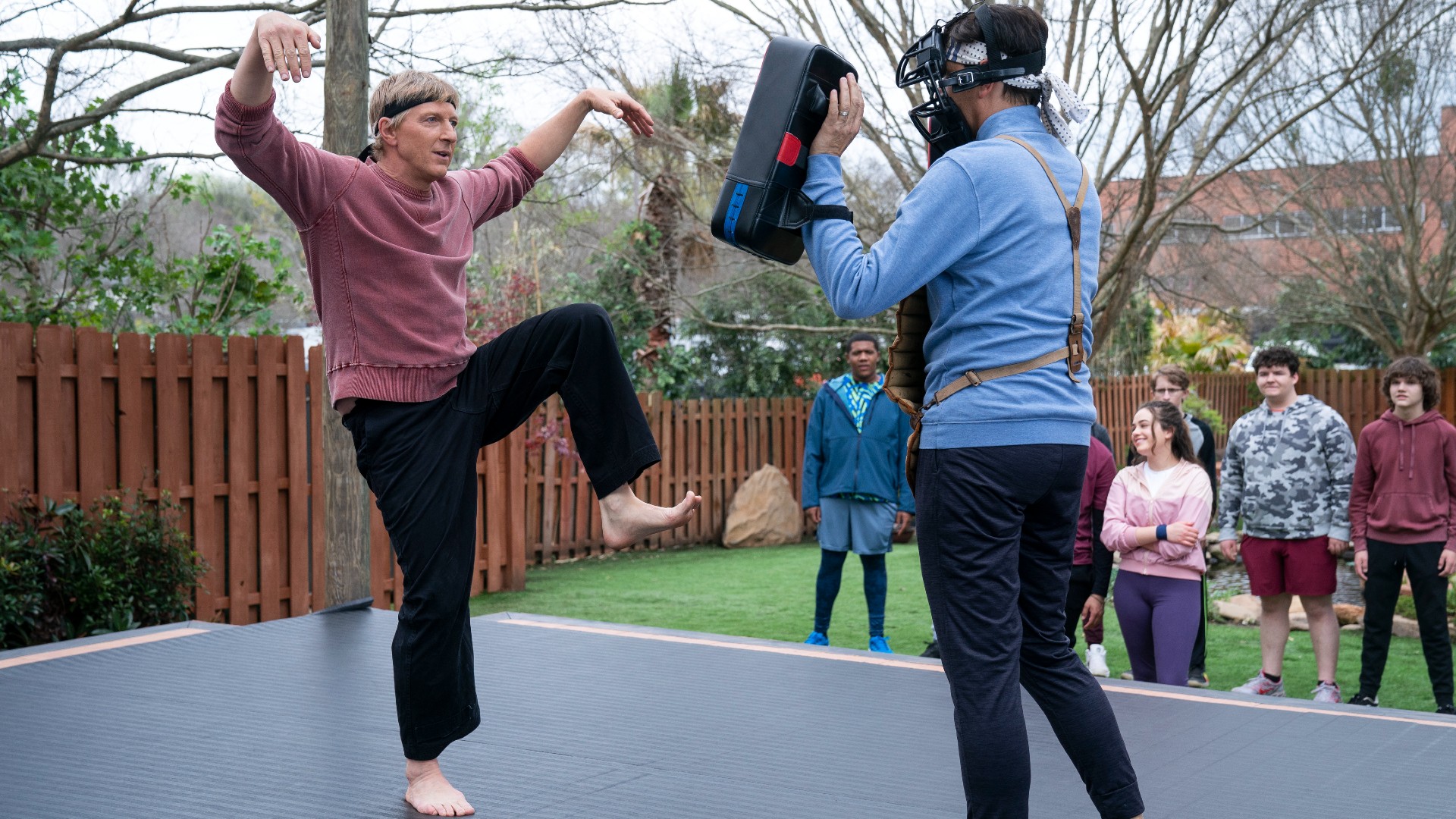 Cobra Kai has mastered the season finale cliffhanger just like Daniel-san mastered ‘wax on, wax off.’ It started with its first season finale. That ended with the startling appearance of Sensei John Kreese (Martin Kove), which took the series to a whole new level. The season 2 finale literally tossed us off that cliff with Miguel’s (Xolo Maridueña) spine-breaking fall. And in the finale of season 3, Daniel (Ralph Macchio) and Johnny (William Zabka) are forced to unite for the ultimate showdown against Cobra Kai in the arena that started it all, the All Valley Karate Tournament.

Keeping up the pace, the ending of season 4 delivers several rapid-fire twists and spinning kicks, setting the stage for the inevitable season 5. As expected, season 4 culminated at the nefarious All Valley Karate Tournament. The competition was packed with so many changes of heart: Daniel and Johnny reconciling after their turbulent failure to cooperate, Miguel bailing on the finals, Robby’s (Tanner Buchanan) realization after taking Kenny (Dallas Dupree Young) under his wing then seeing him bully Anthony (Griffin Santopietro), Tory’s (Peyton List) concern for Sam (Mary Mouser) after landing her decisive kick, and most of all, Kreese’s “moment of sympathy.”

The All Valley Karate Tournament is stretched across the last two season 4 episodes “The Fall” and “The Rise” – the finale being the longest episode of the season clocking overtime at 47 minutes long. But it is those last ten minutes that delivered the hardest hitting punches.

In the wake of the tournament, Terry Silver (Thomas Ian Griffith) and Kreese celebrate their victory by toasting Cobra Kai with a bottle of 1998 Bollinger, but we know something’s up when Silver doesn’t drink. True to his original Karate Kid Part III villainy, Silver reveals his treachery with a wicked backstabbing betrayal of Kreese.

“I’m shedding my weakness, Captain,” says Silver as his deceitful ploy comes to fruition. After beating down Stingray (Paul Walter Hauser) so badly he was hospitalized, Silver cajoles him into framing Kreese for the beating as the way to rejoin Cobra. When the police arrive, Silver makes a dismissive piano playing gesture, echoing the very first scene of season 4 where he is playing piano. He’s been playing Kreese, and everyone else, all along.

What’s more, Silver tips the hand of season 5 with a parting shot to Kreese as he gets arrested. In an offhand way, Silver tells Kreese, “I’m sure I can dig up an old friend or two to help out with Cobra Kai while you deal with your legal problems.” Who could that be?

Odds are that the helper will be Silver’s accomplice in The Karate Kid Part III, “Karate’s Bad Boy” Mike Barnes (Sean Kanen). In the threequel, Silver hired Barnes to be the Cobra Kai champion at the All Valley Karate Tournament. Not only was Barnes engaged to defeat Daniel, but he was also to beat him ruthlessly throughout the bout. If Barnes had won, his reward was 50% ownership of Cobra Kai, which Silver had planned to expand after the tournament. However, they were both banned from the tournament due to their misbehavior.

In addition, Barnes had two henchmen, Snake (Jonathan Avildsen) and Dennis (William Christopher Ford). Kanen, Avildsen, and Ford are all still active in Hollywood and are likely available to reprise their roles. Kanen has been working as an actor in both film and television, as well as a screenwriter. Avildsen, the son of the director of The Karate Kid Part III, John G. Avildsen, worked in television until 2002 but returned to appear in a 2017 documentary on his father. Ford has also continued to work as an actor, plus has been producer and director having worked on many recent shorts for the Martial Arts History Museum.

Another Cobra Kai veteran is Dutch (Chad McQueen). He was the most vicious in Johnny Lawrence’s teen gang. Cobra Kai already explained that Dutch is doing time in Lompoc Federal Prison in season 2. Dutch did not appear in The Karate Kid Part III so it’s unclear whether he and Silver ever crossed paths. But perhaps Lompoc is where Kreese will be sent.

Postulating over Kreese’s potential encounters in the joint, Kenny’s brother Shawn (Okea Eme-Akwari) could come into play. Shawn was incarcerated in Sylmar Juvenile Corrections with Robby, but he appeared bigger and older, so perhaps he’ll age out of juvie and be transferred to Lompoc too. Given how Cobra Kai intertwines its character story arcs, Kreese is sure to meet someone in prison and uniting any combination of these three would be very Cobra Kai.

Throughout the series, much of the drama of Cobra Kai has been about navigating the dynamics of parenthood. Daniel and Amanda’s (Courtney Henggeler) relationship with Sam and Johnny’s relationship with Robby, as well as with his father Sid (Ed Asner), have been dramatic and complex. We see all sides of their relationships, and while that might not justify their actions, these stories provide context and motivations. And those season 4 finale hugs – when Sam hugs Daniel just prior to her bout with Tory and when Robby hugs Johnny at the abandoned Cobra Kai Dojo, who doesn’t get the feels? Adding Miguel’s dad into the mix just thickens the drama.

When Miguel hops on the bus in hopes of finding his father in Mexico City, he opens another potential parent-child relationship. Miguel’s relationship to his single mom Carmen (Vanessa Rubio) has always been in the shadow of his mysterious “very bad man” father. Maybe Miguel’s father will be a completely new character. Or maybe he’ll be someone like Barnes or Dutch. Remember how Cobra Kai intertwines its character story arcs.

And when might we delve deeper into Tory’s parents? Who is her father? Maybe that’s being saved for an upcoming season.

The Return of Chozen

Bringing back Chozen (Yuji Okumoto) is yet another masterful stroke for Cobra Kai. He only appears for a moment, and only speaks one line ‘Os!’ It’s a commonly used term in Karate, a grunt of agreement with militaristic overtones. With that, Chozen confirms he’s all in for season 5.

At the end of season 3, the pact was made between Kreese, Daniel and Johnny – the losers of the All Valley Karate Tournament had to close their dojos. While Johnny’s sense of honor is twisted enough that he might find a loophole to keep Eagle Fang going, Daniel is more bound to honor his word. He must close Miyagi-Do. However, his loophole will lie within the alliance with his old adversary.

Chozen provides a handy workaround for the Miyagi-Do and Eagle Fang ban. He was never a member of either school. He studied with his uncle, Sato Toguchi (Danny Kamekona), at Sato’s Karate Dojo. Perhaps he will open a new dojo to face the expanding Cobra Kai franchise under Silver.

Chozen’s appearance in season 3 was a total spotlight stealer, played out with exactly the sort of canonical reverence that we’ve come to expect from Cobra Kai. Okumoto brilliantly recaptured the character of Chozen, maturing him 34+ years like Daniel and Johnny. And critical to the overarching story, Chozen has Karate techniques that Daniel never learned. He taught Daniel Kyusho – the technique of vital point striking – that made Daniel lose control of his arm. Daniel used it on Kreese in the season 3 finale and on Johnny in their season 4 rematch. Chozen also gave Daniel an ancient scroll with a secret technique, one that Daniel warned his son Anthony about when he discovered it.

Okumoto has been consistently working in movies and television since before The Karate Kid Part II up until today. He has now accumulated nearly a hundred roles to his credit. Most recently in 2020, he had a delightful cameo in breakout martial arts indie comedy drama, The Paper Tigers, which he also produced. He plays a waiter named Wing, a subtle play on his real life as a restauranter. In real life, Okumoto owns and operates Kona Kitchen, a Hawaiian style restaurant that has two locations in the state of Washington. What’s more, Wing makes a joking reference to The Karate Kid, which was allegedly improvised by Okumoto.

As an interesting footnote, the creators of Cobra Kai, Josh Heald, Jon Hurwitz, and Hayden Schlossberg, were signed by Sony Pictures Television for a four-year deal last September. Included in that deal is exploring the expansion of the Karate Kid and Cobra Kai universe with spinoffs and other offshoots, akin to what Breaking Bad did with Better Call Saul and El Camino.

The creators are tight lipped about what might come, but maybe there will be spinoffs based on other characters in the franchise, or perhaps even feature films. After the Vietnam flashbacks last season, perhaps a prequel series about a young Kreese, or even a young Miyagi might work. After fans were saddened when Aisha (Nichole Brown) was written out, she made a small cameo in Season Four. That may have appeased the fans, but could she carry her own series? And we’d love to see more of Ali (Elizabeth Shue) but that’s just because many longtime fans are still crushing on her.

Cobra Kai season 5 is likely due for a late 2022, but with this new deal, it’s looking like there might be even more to come than that.