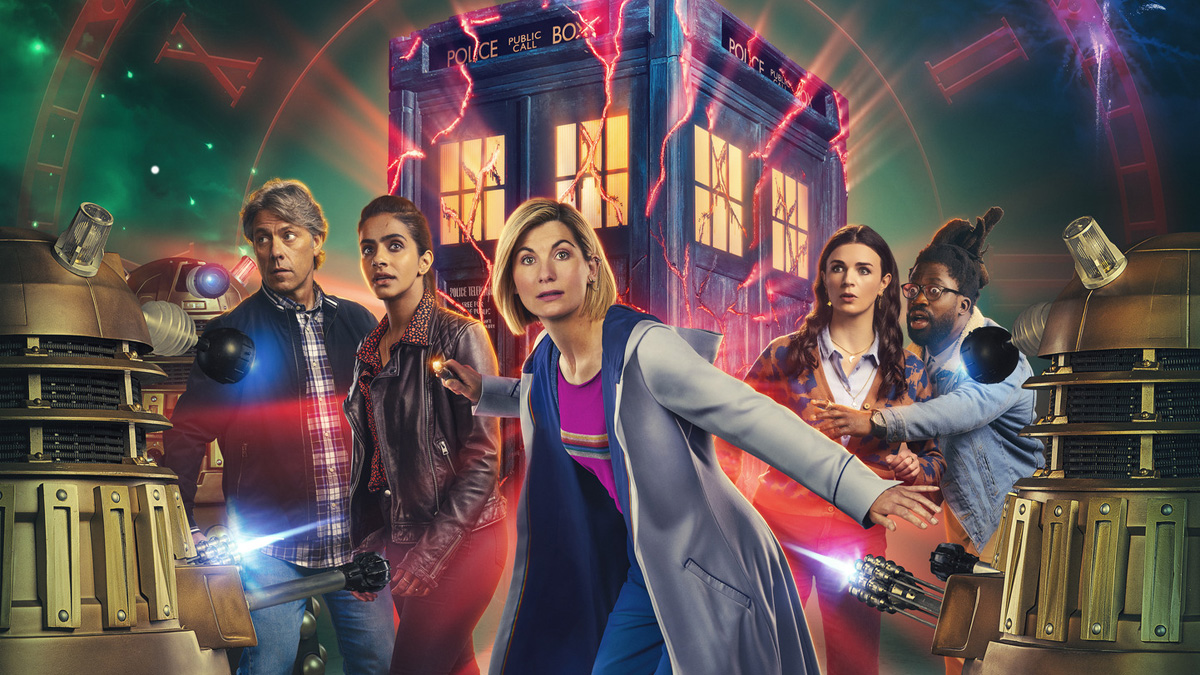 Warning: this review contains spoilers for Doctor Who ‘Eve of the Daleks’

“You go through all those presents and right at the end, tucked away at the bottom, there’s always one stupid old satsuma. Who wants a satsuma?”

Surprisingly prescient words, spoken by the newly-minted Tenth Doctor all those Christmases ago. After all, we as an audience have barely finished unwrapping Doctor Who: Flux, which was teed up to be the biggest, most ambitious, apocalyptic magnum opus of Chris Chibnall’s tenure – the very definition of an overstuffed stocking. By contrast, being back to business as usual and the third New Year’s Day Dalek special in a row, there was every chance that ‘Eve of the Daleks’ was going to turn out to be the satsuma of this year’s run.

How delightful, then, that this holiday outing turned out not just to be one of the tightest and most engaging episodes Chibnall’s ever written, it’s also one of the better Dalek outings since the show came back in 2005. Absolved of a self-imposed need to deliver whopping great changes to the show’s canon or to try and deliver prestige entertainment in place of family telly, this story clearly lands in a place where Chibnall is most at his ease – a small cast of offbeat characters, a location with an established sense of place, and a ticking clock to outrun. In that regard, it’s similar to his first-ever Doctor Who episode, ‘42’.

We’ve a lengthy pre-titles sequence which introduces Aisling Bea as Sarah – grumpy, acerbic, and very much aware that everyone she knows is having a better New Year’s Eve than she is. We also meet Nick – heartfelt, hopelessly optimistic and wielding Monopoly. In their own ways, they both embody different perspectives on coping with holidays where you’re having a terrible time – is it better to face up to how awful things are, or soldier on and try to make the best of it?

Nick is here to stow the rather weathered edition in his storage unit, but is clearly so desperate to eke out his brief time in Sarah’s company that he insists on being read the full list of banned items. “Is it a toxic, hazardous or radioactive board game?” she asks, witheringly. Yes, Sarah, it’s Monopoly at Christmastime. That’s caused wars.

Here’s when the Doctor, Yaz and Dan gatecrash Sarah’s seasonal doldrums, because the Doctor has decided to initiate a full reset to flush out the remaining Flux debris from the TARDIS and “minimise the number of doors”. This line feels like a leftover from a slightly older version of Flux, because the Doctor already did a cold reboot in ‘Village of the Angels’ and the TARDIS seemed to be back to normal after that. It doesn’t really matter either way, though – whatever the Doctor’s reasoning, it serves to boot them all out of the police box and into the plot.

We’re missing one key player in all this, of course – well, two, if you count a criminally underused Pauline Quirke as Sarah’s Mum. A Dalek arrives, and although it’s mostly of the bronze design that’s endured since 2005, it is now equipped with a rapid-fire upgrade to its gunstick. It doesn’t serve much of a plot purpose (though perhaps quick successive blasts are what stops the Doctor regenerating?) but from a production perspective it’s remarkably effective – hearing the traditional weapon fire effect revved up this way just makes the Daleks seem more intimidating than usual, somehow.

This Dalek makes short work of Nick and Sarah before confronting the Doctor, who finds herself unable to jam its weapons systems with her sonic. (Wait, when did that work, exactly?) Just this once, everybody dies! Except it’s not really just once, because this is a time loop story, and so everyone finds themselves back at the beginning ready for round two.

It’s quite common in sci-fi for people to become gradually aware of time loops over several iterations, but the story doesn’t have time for that, so everyone’s immediately clued into what’s happening and we learn some of the nuts and bolts of how the episode will work: the exit is shielded, the place is full of Jeff’s random contraband, and the Dalek is predicting what their actions will be in each loop based on what they tried in the immediate past.

The Dalek knows it has the upper hand and absolutely relishes these encounters. Sometimes it toys with its prey, taking time to insult and belittle their efforts to escape, other times it just glides into the room and makes people dead. It’s this unpredictability and a sense that the mutant is really savouring its mission that makes this one of the most chilling uses of a Dalek since, well, ‘Dalek’.

Loop three sees the group discover the truth about Nick’s storage unit, in which he’s been storing discarded items from every ex-girlfriend ‘just in case’. Sarah absolutely demolishes Nick here, and his direct response is to sacrifice himself in a vain attempt to secure freedom for the others – or perhaps it’s just less painful for him than staying in the room with Sarah. Part of what makes Aisling Bea’s character so interesting is that while she doesn’t intend to be cruel, she’s unabashedly selfish and short-tempered, and her thoughtless actions result in genuine harm to others.

Since the Doctor can’t resonate concrete (a lovely callback to ‘The Doctor Dances’) and escape the Dalek we’re soon onto loop four, where everyone’s made aware that each go-around is getting shorter – and on top of that, a second Dalek has arrived. These reversals of fortune are part of what makes this story work so well. Each and every time it looks like the Doctor’s about to get the upper hand, the Daleks raise the stakes and scupper whatever her plan is.

Dan goes off to delay the new Dalek in a tactical move every five-year-old figured out ages ago – he runs around it in a circle faster than it can turn to face him, though it’s a short-term strategy at best. From the original foe, we learn that it’s the TARDIS reset that’s responsible for the time loop, and the Daleks are seizing on the opportunity to pay back the Doctor for their war fleet being destroyed by the Flux. (It seems that the universe will remember the events of the second wave for future stories, but the devastating consequences of the first Flux will continue to be swept under the rug, at least for now.)

In loop five, the logic of the episode stumbles slightly. Sarah suggests that in the loops so far, Nick has never survived past 11:55pm – and if that pattern holds, by the time the next loop begins, he’ll already be dead. The Doctor seems to agree with this assessment, and heads off to save him.

It’s a nice idea, but Sarah herself is gunned down almost immediately in loop six and yet she’s alive and well next time around. After that, this potential extra wrinkle – companions needing to survive long enough to reach the minutes the next loop will encompass – never gets mentioned again. If Sarah had been the one to insist on doing the saving, there would have been some emotional heft to this, but Nick ends up rescuing himself and ultimately it’s just a slightly odd diversion. That said, the fact this nit exists to pick is testament to how tightly the rest of the story has been written.

Running out of minutes, the Doctor realises that the Daleks’ weakness is that they’re anticipating the humans’ actions based on what they got up to in the previous loop. She suggests using one of the loops to enact a decoy plan – feeding false information for the Daleks to ingest which will get them out of the way long enough to escape. As part of this, Nick runs to his storage unit and constructs a box fort out of all his ex-partners’ belongings, leading the Daleks to believe that building bunkers is the Doctor’s new strategy. When the final loop arrives, they converge on what they believe to be another barricade full of cowering humans, only to ignite Jeff’s illegal fireworks and blow themselves sky-high as Team TARDIS watch from a safe distance. 2022 arrives, the TARDIS is fixed and Sarah leaves with Nick to go and see the world. Whew.

If that were all there was to this episode, it would still be a bit of a belter, but it also finds time to work in some sweet character-building. Most of this is the ‘meet cute’ between Sarah and Nick, of course, but we also get an important scene where Yaz finally confesses her feelings for the Doctor and Dan, brilliantly, calls the Doctor out on having a lot more emotional awareness than she pretends to. It might be a charitable assessment of Whittaker’s blunt, emotionally-distant incarnation, but it’s a point well made about the character as a whole – somewhere in the Thirteenth Doctor’s head, memories of Rose still linger.

There’s space for a few laughs, too, from Yaz’s horrified “they’re alive still, aren’t they?” when Nick reveals his Vault O’ Girlfriends, and the Dalek’s blunt assertion that Dan has been designated the Inferior Human. It’s certainly not a comedy episode, but it has its fair share of funny lines. The acting’s on point, too, with Whittaker fully leaning into Thirteen’s arrogant streak as she fatefully stares down eyestalk after eyestalk, but it’s Aisling Bea and Adjani Salmon that steal the show this week with two very flawed, vulnerable and human performances.

Maybe it’s all the real estate offered by the ELF Storage facility, but the constraints of pandemic filming seem a lot more obvious here than they did during Flux. There’s a lot of empty space being deployed, whether it’s framing characters in long, thin rooms so they can stand well apart or during carefully-distanced chase scenes. Rather than hamper the production, though, the limited sets and other considerations lead to some interesting choices and angles. The episode feels a lot less cinematic and ‘big-budget’ than Flux, but is no worse off for it.

What’s also interesting is how well this could have served as a regeneration story if the final few minutes had played out differently. There’s the promise of a full TARDIS reset, for one thing (I personally was hoping to see the original console room when the doors opened) but there’s also a surprising cameo from Karl – the same Karl who was being chased by Tim Shaw back in ‘The Woman who Fell to Earth’ and apparently lives in Manchester now. Having him there for the Thirteenth Doctor’s final adventure would have made for quite the narrative bookend…

That’s the realm of might-have-been, though. We’ve two more specials to look forward to, and if they can match the quality and the creativity of ‘Eve of the Daleks’ I suspect people will genuinely be anticipating their arrival. Once again, we see that Doctor Who doesn’t need a huge budget, overburdened scripts or universe-ending antimatter waves to succeed. Sometimes the best things in life are the simple pleasures.

“Who wants a satsuma?” As it turns out, Doctor, I did. Happy New Year.

Doctor Who: Eve of the Daleks is available to stream now on BBC iPlayer in the UK

The Last of Us: Are the Infected Actually Zombies?
The Last of Us: What Happens to Bill and Frank In the Game?
Other Space | Comedy Sci-Fi Series | Coming Soon to DUST on TV
SHAZAM! FURY OF THE GODS – Official Trailer 2
How Did the Cordyceps Infection Start In The Last of Us Games?