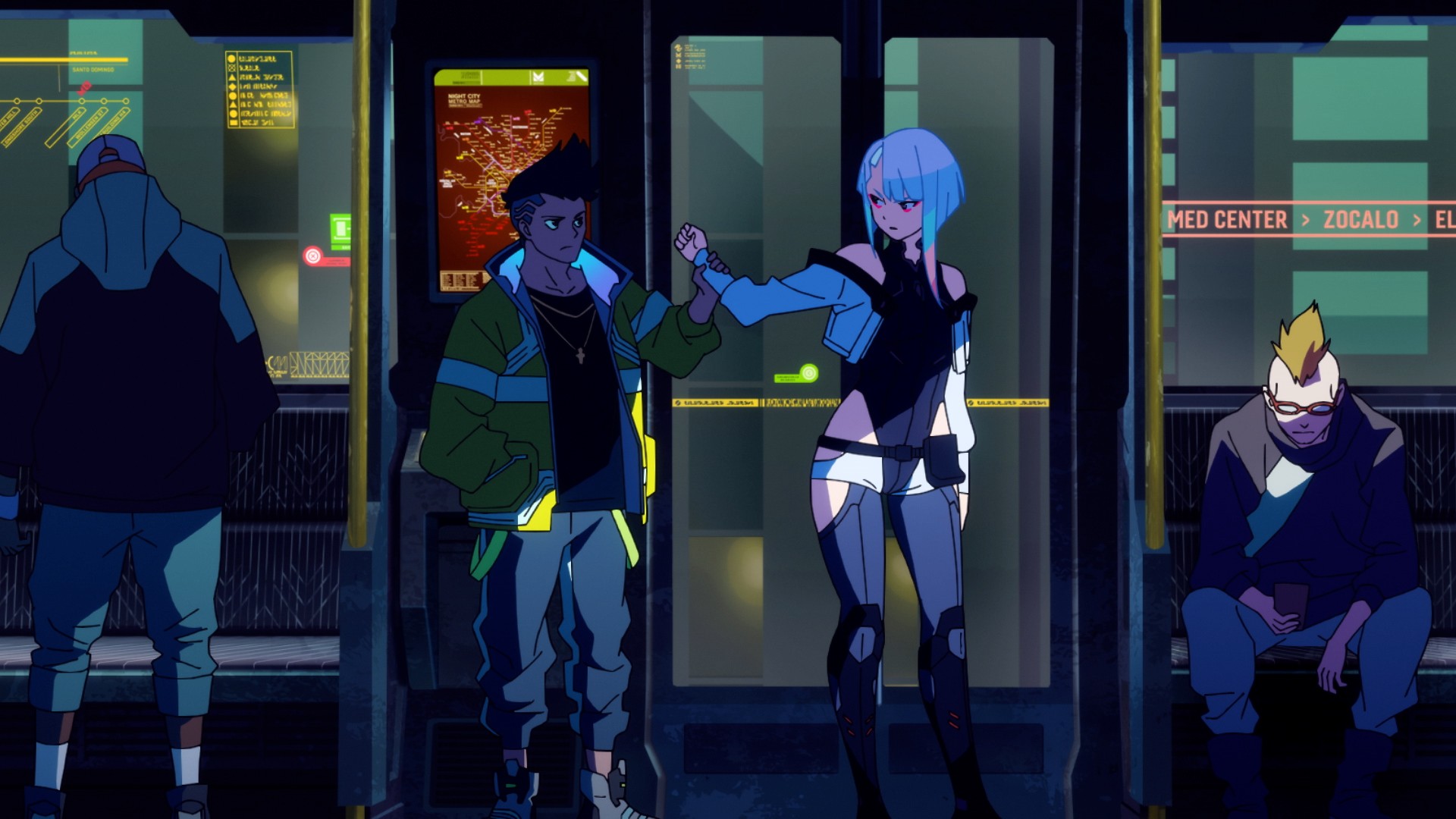 Cyberpunk: Edgerunners is a fantastic show even when you remove any connections to its source material, and boy are there connections. The anime is filled with cameos and easter eggs that translate characters, weapons, and locations from Cyberpunk 2077 into anime form. It only seemed fair for CD Projekt RED to return the favor.

The release of Cyberpunk 2077 Patch 1.6 coincided with the launch of Cyberpunk: Edgerunners, which was apparently the plan since the patch was nicknamed the “Edgerunners Update.” Not only did this patch implement yet more fixes that finally made the game worth playing, the update also added several new gigs and weapons. One of these armaments is a chainsword, the Cut-O-Matic, which is perfect for everyone who wants a little Warhammer 40K in their Cyberpunk 2077. However, the patch’s most noteworthy additions are all the easter eggs that reference Cyberpunk: Edgerunners. Players can now buy a drink named after the anime’s protagonist, “The David Martinez,” in Afterlife, and you can also visit the apartments of the show’s main characters. More importantly, you can don some equipment from the show. Here is all the crossover loot gamers have found so far and how you can claim them as your own:

If looks could kill in Cyberpunk: Edgerunners, nobody would need guns. Every character sports a unique style, including David Martinez. He is often seen with his signature yellow jacket, and you can wear it too if you know where to look.

The first stop on your quest for David’s Jacket is David’s apartment, or at least the complex that houses it, Megabuilding H4. The tower is found in the Arroyo sub-district of Santo Domingo near Metro: Wollesen Street. You can’t actually enter the apartment building because of an ongoing quarantine, but you can visit a small side alley underneath it. Just beeline towards Megabuilding H4 from the fast travel point, walk around the apartment clockwise, and the alley should be on your right. You know you’ve found the correct place because it is marked with graffiti of the Edgerunner logo.

Right next to the graffiti is a trash can, and the next leg of the journey is inside it. Rifling through the garbage nets you a braindance headset. We’re not going to spoil what it contains, but after the braindance is finished, the game automatically gives you the side job “Over the Edge,” which is actually fairly easy. All you have to do is text Muamar “El Capitán” Reyes and ask him about David Martinez, and El Capitán will scrounge up what information he can. Then you have to play the waiting game. Let 24 hours pass in-game, and one of the anime’s secondary characters, Falco, will text you. Just read through what he has to say, and you can then pick up David’s Jacket. Follow the map, interact with the case, and the Legendary piece of equipment is yours.

David Martinez might be Cyberpunk: Edgerunners’ main character, but Rebecca is the star of the show. The only thing shorter than her stature is her temper, and she loves packing enough heat to take on multiple gangs at once. Although, while Rebecca wields every weapon under the sun in the anime, her favorite by far is her personal shotgun Guts, which you can acquire in Cyberpunk 2077. Finders keepers.

Unlike David’s Jacket, Guts isn’t tied to a side job or gig; you can pick up the item any time you like. Granted, the weapon is off the beaten path, but it’s otherwise ripe for the taking. To find Guts, you need to visit City Center Corpo Plaza. Ideally, fast travel to the area via Arasaka Tower. Head in the direction of the giant holographic fish. Keep walking/exploring until you see three monks meditating off to the side. Walk into the bushes behind them and you will find Guts camouflaged in the shrubbery. Just pick the weapon up, and it’s yours to use as you please.