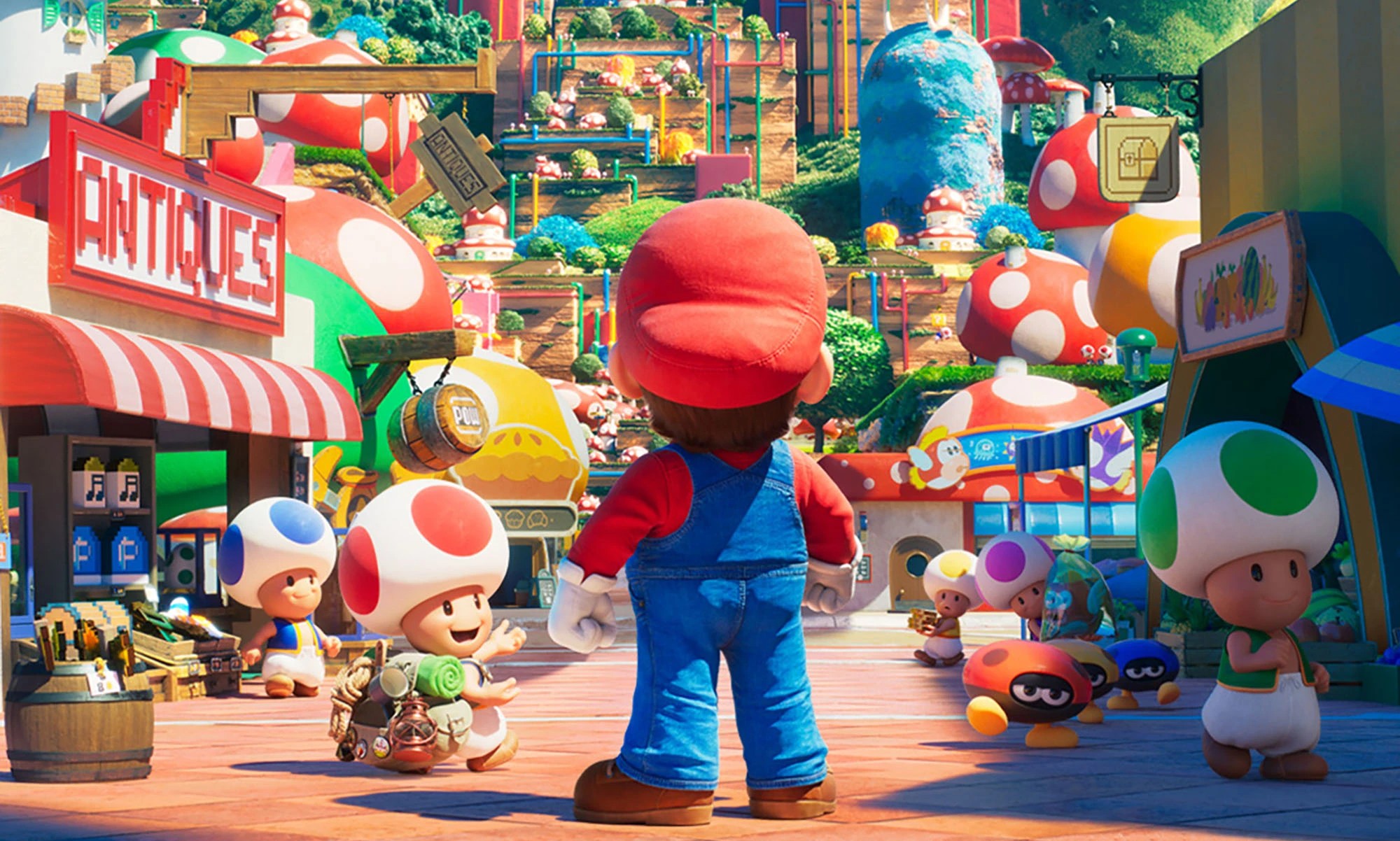 Nintendo and Universal Pictures has finally delivered the big trailer for The Super Mario Bros. Movie, and this time it’s more than just two scenes and a stinger. We finally have something else to talk about besides Chris Pratt’s questionable Mario voice acting!

Now we get to see Princess Peach, Donkey Kong, some kart-driving action, and Luigi doing more than just screaming for his life (well, not MUCH more). We definitely have a better look at what this movie has to offer and with this broader scope comes plenty of easter Eggs.

Mario has been in so many games, and crossed so many genres, that there’s plenty of source material for Illumination to pull from. Even through there are still a few big names from Mario lore that are likely being saved for the sequel (or at least post-credits scene — I’m looking at you, Wario!), The Super Mario Bros. Movie doesn’t cut any corners when it comes to all the background details and cameos. Here are all the big call backs we found…

At first glance, this movie appears to be an adaptation of the original Super Mario Bros. game. Though considering how often the series has recycled that basic formula through the decades, it might as well just be a coincidence at this point. Either way, all the Nintendo characters you expected to see in this movie are in attendance: Mario, Luigi, Peach, and Toad as well as Bowser, and his many minions.

These minions include the Koopas, Goombas, Hammer Bros., Bob-Ombs, and Piranha Plants in one shot, while Bloopers and Bullet Bills make appearances elsewhere. Shy Guys are in there, though they were introduced in Doki Doki Panic and its U.S. reskin Super Mario Bros. 2. While that game has mostly been ignored by sequels, the Shy Guys have become a staple of the Mario mythos.

As you might expect, there are plenty of references to platforming. What looks to be an obstacle course to train Mario feels like something out of Super Mario Maker, complete with fire bars (big faves in that sandbox game) as well as cannons. Here, the Piranha Plants look to be fake, but the Bullet Bills are very real. Also real are those bullshit donut platforms that fall down a second after you jump on one.

Fire Flowers are shown off, and specifically their effect on Peach. While Peach has been able to wield Fire Flowers in Mario Kart and Smash Bros. games, the only time she has been transformed to the red and white palette by the power up is Super Mario 3D World.

Speaking of the Princess, Peach’s role seems to be more of a mentor than a damsel in distress, which is a fun subversion. Instead, it seems scaredy-cat Luigi plays the damsel, which is just perfect.

Meanwhile, the Toads look over a map of the various lands in the film, and it looks just like your typical Mario game map marking all the different levels. While desert lands are normal to find in Mario games, it could also be a reference to Sarasaland, introduced in Super Mario Land. It’s an Egypt-themed realm and ruled over by Princess Daisy, who Luigi will surely get to know down the line.

During the shot of Bowser’s minions, it looks like there are a couple Sledge Brothers in there. They at least seem bigger than your usual Hammer Brothers.

The biggest takeaway from Super Mario Bros. 3 is Mario rocking the Tanooki Suit. Not only does it give him the ability to fly, but he can also turn himself into an invincible and rather worthless statue! Personally, I would have gone with the cape.

The trailer begins with Mario facing down the Rare incarnation of Donkey Kong, first introduced in Donkey Kong Country, and it appears that the old ape casually watching this beatdown is Cranky Kong, who will be voiced by Fred Armisen. While they may have done away with this bit of lore by now, Nintendo once claimed that Cranky was the aged version of the titular Donkey Kong from the original game.

As Donkey Kong bludgeons Mario, we can see that the platform they’re on is one of the girders from the old Donkey Kong game.

Despite their history as rivals, including those weird Game Boy Advance games with the robot Mario dolls, Mario and Donkey Kong are usually on good terms. That’s why it’s no surprise when the leader of the DK crew is following Mario in the big Mario Kart shot later on. Other apes joining in include Kiddy Kong and Funky Kong.

Not Mario, though. Mushroom jokes aside, Mario knows that when you do drugs, you got to Hell before you die.

The big finale of the trailer shows Mario leading a convoy in what is essentially Mad Max: Fury Road on the Rainbow Road. Mario himself is driving your classic Mario Kart car.

In another shot, Peach is shown in the trailer wearing a full-body suit as she prepares to confront Bowser’s invasion. This is her biker outfit from Mario Kart Wii, shown again when she’s riding her motorcycle.

A herd of Yoshis are shown running through a jungle while a pink one stands still and looks over his shoulder. Yoshi was introduced in Super Mario World. Usually, the “main” Yoshi is green, so this looks to be little more than an establishing shot. It kind of looks like there might be a green Yoshi in the Mario Kart segment when you see everyone from behind, but that just might be the reflection of Rainbow Road messing with me.

What is interesting is the brand synergy in all of this. Illumination is part of Universal and they have been working on various versions of Super Nintendo World in the different Universal theme parks. The three attractions include a Yoshi dark ride, a Mario Kart dark ride with AR goggles, and a thrill ride based on the Donkey Kong Country mine cart stages. Notice that all three of those seem to be represented in this movie.

The trailer teases that before Mario and Luigi entered the Mushroom Kingdom, they were plumbers in Brooklyn. This origin story has been used twice before: in The Super Mario Bros. Super Show and the original Super Mario Bros. live-action movie.

While the Super Mario Bros. anime did also include the plot that Mario and Luigi were outsiders, they were not actually plumbers but employees at a grocery store. Then again, there is a grocery store in the background in the trailer… Nah, I’m sure that’s nothing.

As of Yoshi’s Island, Nintendo seems to have done away with the idea of Mario and Luigi being from “the real world,” but in terms of storytelling, it is an easy way to make them POV characters for us to follow.

One of the character posters shows Mario with the tagline, “PLUMBING’S OUR GAME.” This is a lyric from the Super Mario Bros. Super Show’s theme song.

Before running into battle against Donkey Kong, Mario tells himself, “Let’s a go.” That was his recurring line in his Nintendo 64 debut.

The appearance of Peach’s castle borrows heavily from Super Mario 64, which took place entirely on those grounds (interdimensional portals notwithstanding). Not just the massive stained glass image of Peach, but also the giant framed paintings so big you can probably jump right into them!

Super Mario 64 also introduced the talking penguins who got a bigger role in this movie’s first trailer.

Sadly, as much as I wanted to believe that Luigi was carrying his ghost vacuum in the trailer, that’s just a box of tools with a plunger sticking out. But hey, at least the movie appears to be jumping onto Luigi’s scaredy cat persona that those games play into.

What’s funny is that Luigi isn’t totally wrong when he tells Bowser, “You think I know every human being with a mustache wearing an identical outfit with a hat with the letter of his first name on it?!” He probably hasn’t met Wario yet.

Due to complicated rights issues, I wouldn’t expect to see too many references to the beloved Super Mario RPG. It’s a shame, since Smithy really should be the Thanos of the Mario Cinematic Universe. The game does get a little love when Peach and Toad are advancing forward, brandishing weapons. Peach pulls out an axe and Toad gets out…a frying pan. Meager as it may seem, the frying pan was Peach’s ultimate weapon in Super Mario RPG. Toad knows what’s up.