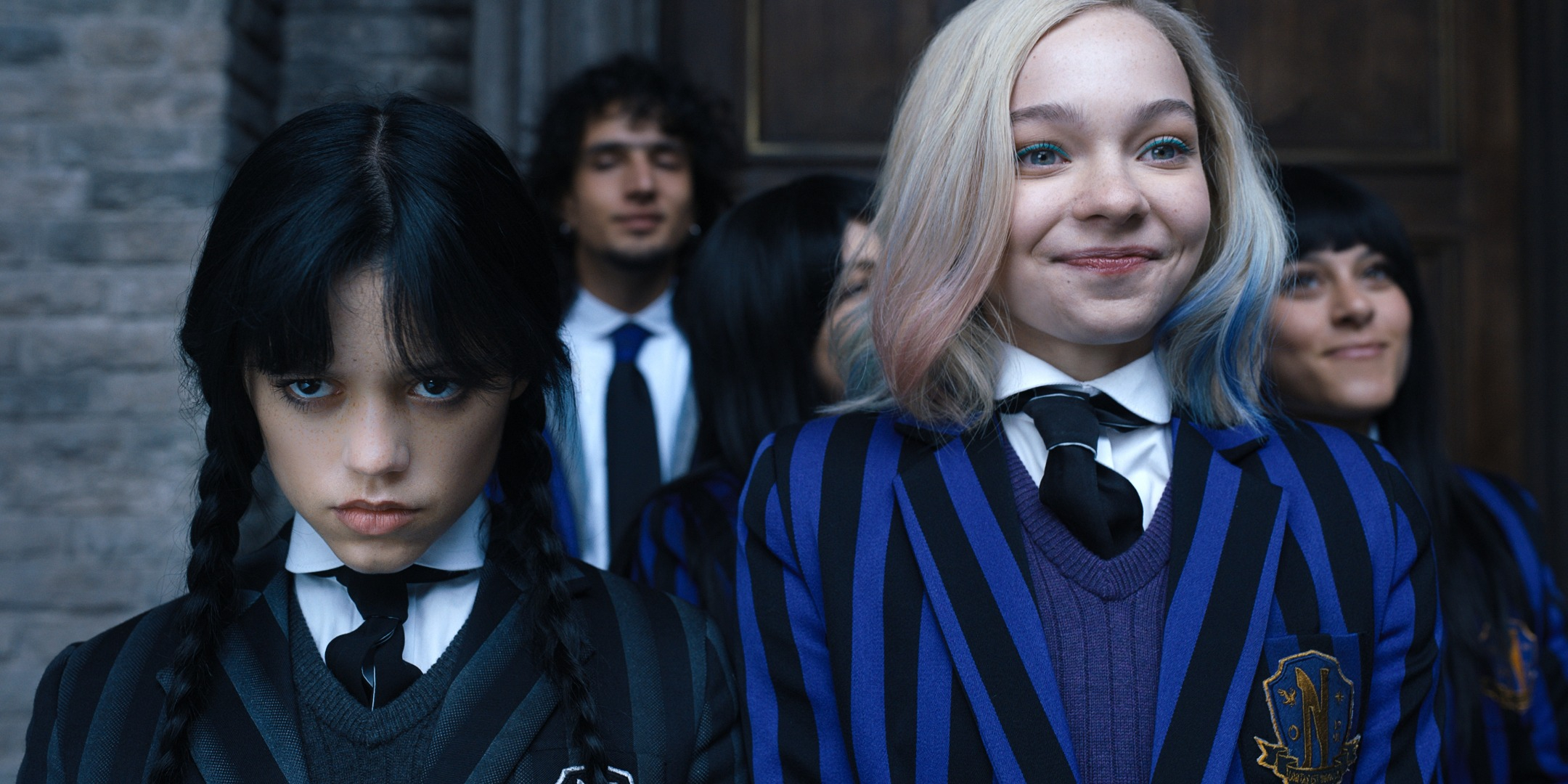 The first season of Netflix’s Wednesday saw our favorite goth princess have not one, but two potential love interests – “normie” Tyler (Hunter Doohan) and the psychic painter, Xavier (Percy Hynes White). However, since things didn’t work out with either of them in the aftermath of the finale, fans have also been shipping Wednesday (Jenna Ortega) with her roommate, Enid (Emma Myers), given how close the unlikely friends grow throughout the season. But it’s not just fans who want to see this grumpy/sunshine relationship have a chance on screen, Wednesday herself, Jenna Ortega, also ships her character with Enid.

During a press junket, Jenna Ortega told PRIDE that “In a perfect world, [Wednesday and Enid] would have been a thing.” She also told MTV News that she doesn’t see her character moving forward romantically with Xavier, saying “Now that Tyler’s off the table, I feel like she’s off of boys for a while. I feel like her and Xavier are just getting to a safe place. I think there’s an opportunity there for a really sweet platonic relationship.”

Wednesday’s queerness and potential bisexuality have already been alluded to in this first season. Whenever Xavier runs into her at the carnival, Wednesday tells him that she is waiting for someone, to which Xavier replies “Oh yeah? Who’s the lucky guy…or girl?” While Wednesday’s subsequent deflection of his question could just be her hesitancy to let people in, many queer fans take her non-answer as a potential opening for Wednesday’s queerness to be addressed if the show were to be renewed.

Emma Myers is also into Enid and Wednesday being more than just friends and roommates, telling Elite Daily that she and Ortega would reference the “and they were roommates” meme frequently while on set. This meme is often used in fandoms to refer to characters that started out as roommates and then either canonically or within fan-fiction become romantic partners.

Knowing that both Ortega and Emma Myers support a relationship between Enid and Wednesday seems to bode well for the potential on-screen future of this ship. Bisexual representation is still not where it should be, and making such a well-known character canonically queer, pansexual, or bisexual would be a step in the right direction.

Without diving too deep into the academic side of queer theory, queerness as a term can be used under that umbrella to refer to anything outside of what society deems “normal.” In most cases “normal” refers to cisgender, Christian, heterosexual, white men, and anything outside of that is considered the “other.” Based on this definition, Wednesday already operates in a queer state of being, so it would honestly make way more sense for her to not be straight.

Whether we get to actually see a romance bloom between Enid and Wednesday is yet to be determined – season 2 of Wednesday hasn’t even officially been confirmed – but hopefully the series will give them a chance given Ortega and Myers’ support. People love that Wednesday is her own person, who refuses to conform to what society expects of her. Why should her romantic relationships be any different?