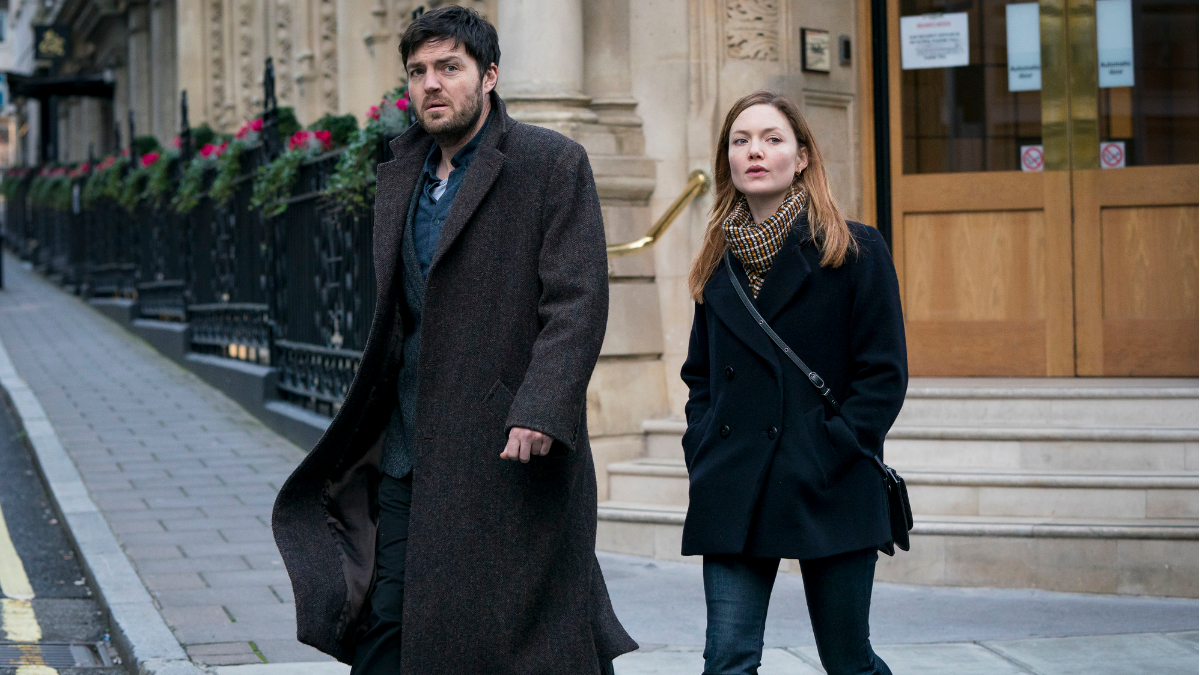 Warning: contains major spoilers for The Cuckoo’s Calling, The SilkworM, Career of Evil AND LETHAL WHITE

To a childhood friend, he’s Bunsen. To his sister, he’s Stick. To the colleague whose life he saved, he’s Bob, and to his ex-fiancee, he’s Bluey. In the US, they know him as C.B. Strike, but in the UK, he’s Cormoran Strike, a Cornish PI operating out of Soho’s Denmark Street. He’s the star of five detective novels by Robert Galbraith (an alias of J.K. Rowling), and he’ll soon be back on BBC One starring in his fifth miniseries Strike: Troubled Blood.

As it’s been over two years since we last saw Cormoran and his agency partner Robin Ellacott in the Strike: Lethal White finale, here’s a refresher on what we need to remember from last time around.

Robin and Matthew: the Wedding and the Divorce

In the final moments of Career of Evil, Robin said ‘I do’ to her long-time boyfriend Matthew, despite having learned that he’d cheated on her with a colleague – Sarah – years earlier when she was suffering from the aftermath of her university attack. After firing Robin for endangering the case by pursuing a lead solo, Strike raced to her Yorkshire wedding and made it just before the couple exchanged vows. Seeing Strike at the back of the church, Robin smiled and married Matthew.

In Lethal White, after the pair had moved into a new house together to begin married life, Robin discovered one of Sarah’s earrings on their bedroom floor and realised that Matthew was still cheating on her. She packed a bag and left him, and Troubled Blood finds the pair of them engaged in a messy divorce. Strike too, had a pivotal moment with his ex Charlotte in series four, when she asked him if he’d loved anybody the way he loved her since they broke up. “I haven’t,” said Cormoran, adding an unequivocal “thank fuck for that. I’m off”. Thus the series ended with both Robin and Strike newly single after another of his relationships also ended, but not having expressed their feelings for each other.

We attempt to untangle the convoluted plot here. In short: it was Jasper’s illegitimate son Raphael (Raff). Raff had seduced his step-mother Kinvara and convinced her to collude in the old man’s murder – ostensibly because he loved and wanted to be with her, but really so that he could get his hands on a family painting the value of which only he recognised as worth over 20 million. Jasper disliked Raff and had disinherited him, so Raff started an affair with Kinvara and planned to marry her after Jasper’s death and then kill her a year or so later by staging a riding accident, meaning he inherited the valuable painting through her. Together, they concocted a plan to spike Jasper’s morning orange juice and create a false alibi for Kinvara, but Strike and Robin untangled their web of lies, leading to a confrontation with a gun on a narrow boat, that thankfully everybody who matters survived unscathed.

How Strike and Robin Met

By chance. Robin was assigned to Strike’s Denmark Street office for a week of agency temping as his assistant, but soon found a taste and a talent for the work of a private investigator. In the first series, she successfully interviewed for a much higher-paying HR job in a bland city firm, but chose not to take them up on their offer, finding more satisfaction in Strike’s world, despite the disapproval of her then fiancé and now soon-to-be ex-husband Matthew.

How Strike Became a Private Investigator

After his mother’s death, he dropped out of Oxford university, where he started dating his former fiancée Charlotte Chapman, and joined the army. After losing his lower leg in an explosion in Afghanistan, he transferred to SIB (Special Investigation Branch) and worked as a military police officer, before using those skills to set up his Soho detective agency.

Robin’s Panic Attacks and Dropping Out of University

Mid-way through a degree in psychology, Robin was the victim of an assault on campus by a serial perpetrator wearing a gorilla mask. She gave evidence that led to his conviction for rape and attempted murder, and the trauma led to her dropping out of university and moving back home with her parents. The trauma left her with panic attacks, which she kept secret from Strike until she suffered one while driving them both in series 4, Lethal White, and was forced to tell him.

Only fragments are known in the TV series. Before the series began, Cormoran was engaged to socialite Charlotte Chapman (Peaky Blinders‘ Natasha O’Keeffe). When he first met Robin, he was mid-argument with Charlotte, who stormed out of his office promising that, like always, he would come crawling back to her. Cormoran moved out of their place and started sleeping in his Denmark Street office, where Charlotte sent his possessions in a box marked ‘Arsehole’.

In flashbacks, we learn that Charlotte was pregnant at one point, and that Cormoran doubted he was the father. She self-harmed, possibly a suicide attempt, and he comforted her. Later, she announced her engagement to fellow socialite Jago Ross, and posted Cormoran her wedding photos.

Rock star Jonny Rokeby, whom we’ve never met in the series, and model/ ‘groupie’ Leda Strike. Rokeby is a famed womaniser who fathered several children and is largely absent in their lives (‘As far as Johnny Rokeby was concerned, I was just a shuddering of loins’), giving Cormoran multiple half-siblings. Leda was a supermodel who died of a heroin overdose that Strike has always suspected was administered deliberately by her second husband, musician Jeff Whittaker (Matt King).

There are seven in total in the books, but we’ve only met two on screen – Lucy on his mother’s side and Al on his father’s, but the ‘Rokeby diaspora’ as Al wryly describes them, are scattered all over.

How Strike Lost His Leg

Serving in Helmand Province, Afghanistan. His convoy drove into an ambush in which an IED explosion killed several of his colleagues and lost Strike the lower half of one leg. He wears a prosthetic, but the injury means he’s unable to drive and generally less able to pursue suspects on foot than Robin.

Who Killed Teenager Kelsey Platt in Career of Evil?

Donald Laing (Neil Maskell), who bore a deadly grudge against Strike after he put him away years ago for the murder of his wife. After serving his sentence, Laing stole from and killed a neighbour, then stole the identity of Ray Williams, an ex-firefighter who’d emigrated, and ingratiated himself into the family of teenager Kelsey Platt, who harboured a crush on Cormoran Strike. To get revenge on Strike, Laing lured Kelsey to a London location where he killed and dismembered her, posing as a new client to make Strike visit the same location and frame him for the murder. Laing posted one of Kelsey’s legs to Robin at Strike’s office, along with lyrics from Strike’s mother’s favourite song by Blue Oyster Cult, in order to goad him. Strike realised that Ray Williams and Donald Laing – who pretended to suffer from debilitating arthritis, and was therefore ruled out as a suspect in Kelsey’s murder – were one and the same, under a wig, false beard and coloured contact lenses.

Who Killed Novelist Owen Quine in The Silkworm?

His agent Liz Tassel (Lia Williams). Decades earlier, Liz was in love with fellow writer Andrew Fancourt (Peter Sullivan) and wrote a hurtful parody, which was published anonymously, of his wife’s novel. She spread rumours that Fancourt had written the parody himself, and his wife killed herself over it. Liz’s client Owen learned that she was behind the parody, and blackmailed her about it for years, forcing her to keep him on as a client over the much more successful and celebrated Andrew Fancourt. When Owen submitted a manuscript to Liz that was intended to spill the dirty secrets of the publishing world under a fantasy allegory (including her humiliating attempt to seduce Fancourt), she edited the manuscript to keep her secrets and sent it out to everybody it was based on. She told Owen to stage a public fight with her about it, then hide out in an old house to generate publicity for the sale of the book. In hiding, she murdered him in the same manner that the hero dies in his manuscript, stopping the blackmail once and for all.

Who Killed Lula Landry in The Cuckoo’s Calling?

Her adoptive brother Johnny Bristow (Leo Bill). Johnny hired Strike to investigate Lula’s apparent suicide in an attempt to frame Lula’s biological half-brother Jonah, whom she’d recently tracked down and to whom she’d planned to leave all her money. Johnny pushed Lula to her death and then tried to have Jonah arrested for the murder to make him ineligible to inherit, making Lula’s share of the family estate after their mother’s death come to Johnny. He also murdered Lula’s friend Rochelle, who was blackmailing him over the secret of Lula’s changed will, and as a child, Johnny also killed another of his adopted siblings – a childhood friend of Strike’s named Charlie – by pushing him into a quarry.

Tom Burke has appeared in a long list of television series and films over the past twenty years, with key TV roles in The Musketeers, War & Peace, Utopia, The Hour and recently, The Lazarus Project. Film-wise, he won acclaim for the part of Anthony in Joanna Hogg’s 2019 film The Souvenir and its 2022 sequel, and recently appeared in Bill Nighy feature film Living, after an early role opposite Ryan Gosling in Nicholas Winding Refn’s 2013 film Only God Forgives.

Holliday Grainger has been acting since the age of six, and appeared in a range of children’s television as a child. Her film career has included period roles in Jane Eyre, Great Expectations, Anna Karenina and Cinderella, as well as modern parts in The Riot Club and Bel Ami. TV-wise, she’s recently appeared in both series of BBC thriller The Capture and Sky hit Patrick Melrose after making a name in The Borgias.

Strike: Troubled Blood starts on BBC One on Sunday the 11th of December at 9pm and continues on consecutive nights until Wednesday the 14th of December.

Even More DC Shows Have Been Axed at HBO Max
Dead Space Remake: How to Unlock and Survive Impossible Mode
The only way you’ll get me to run is if a Allosaurus is chasing me.🦖 #short #shorts #scifi
The Sandman | Comic to Screen: Hob Gadling | #Shorts
Arrow Season 6 Episode 16 Review & Reaction | AfterBuzz TV