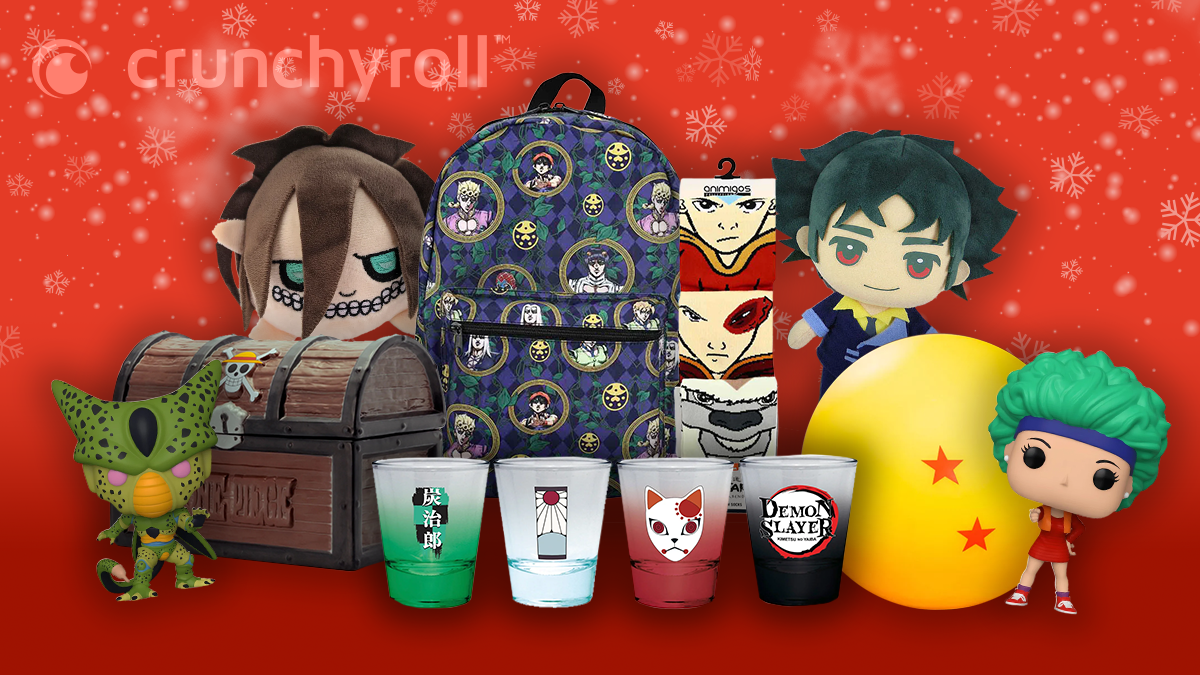 This article is sponsored by Crunchyroll

The holidays are a wonderful time to kick back, relax, and show some appreciation for the very special people in your life–even if that includes yourself. Crunchyroll has become one of the premier anime streaming services, but their talents have expanded far beyond this and they also have a robust store of anime merch that should delight both anime newcomers and otaku alike. Crunchyroll offers plenty of Blu-Ray and manga options, as well as surprise  “blind boxes” that randomize certain merch. There are many options to get lost in, but we’ve highlighted some special items from different categories that are sure to surprise and impress any anime fan this holiday season.

The anime fan who prefers something a little cuddlier than an action figure has a lot of choices when it comes to Crunchyroll’s selection of anime plushies. Cowboy Bebop is a perennial anime favorite that has a galaxy’s worth of merch that’s worth putting a bounty on. Cowboy Bebop’s suave Spike Spiegel is frequently viewed as one of the coolest characters in anime, but he also has a softer side. In the case of this eight-inch plushie, this softer side becomes literal with this adorable take on this assassin-turned-bounty hunter. See you later, plush space cowboy!

There’s absolutely nothing wrong with pre-made figures and accessories, but there’s a massive community that’s passionate over model-building kits. Crunchyroll has a few model options available, but it’s hard to go wrong with the iconic EVA Units from the existential experimental mecha anime, Neon Genesis Evangelion. This kit in particular pulls from Evangelion 3.0+1.0’s Unit-08 EVA, which is one of the best designs from the franchise. This model is 1/400 scale and comes in at just under eight-inches in height. It’s a good gift for anyone who’s curious about getting into model building, but also those who already have several creations on display.

The Mochibi trend takes recognizable characters and transforms them into cute, stackable plush creatures that have “common bodies,” but feature unique, stylized faces. This design helps bring out the playful silliness in already-cute characters, but it’s also a great way to bring out the sweetness in anime’s harshest villains and most intimidating monsters. Crunchyroll offers a Mochibi plush that’s modeled after Eren Jaeger’s Titan design from Attack on Titan. The Titan are horrific beasts and Eren in particular has racked up an unsettling body count. As a Mochibi, fans will want to hug Eren, not scold him.

Action figures aren’t for everybody and some anime fans prefer prop replicas of items that are pulled right out of their favorite worlds. Sometimes props and replicas can go overboard with their scale, but the perfect stocking stuffer is available for fans of Jujutsu Kaisen and the macabre in general. Crunchyroll’s recent horror/shonen sensation, Jujutsu Kaisen, begins with the consumption of an extremely disgusting demon finger. The mad men at Crunchyroll have painstakingly recreated Ryomen Sukuna’s severed finger. It’s a piece of anime iconography that looks great. Plus, it’s a finger that doesn’t cost an arm and a leg.

JoJo’s Bizarre Adventure is one of the most fashion forward anime series and Hirohiko Araki’s exaggerated characters wear some of the wildest designs to ever appear in the medium. It’s only fitting that a piece of JoJo apparel would be endlessly stylish and this suave holiday sweater is a Crunchyroll Exclusive. Rather than cover itself with characters or iconography from the anime, this sweater applies a subtle approach that adopts Giorno Giovanna’s color palette. It’s the perfect piece of clothing to help one Stand user recognize another.

Socks are a holiday gift that people have been conditioned to hate, but this three-design set of Avatar: The Last Airbender socks will finally break this unfair stigma. Socks are a necessary evil that everybody needs, but this attractive set lets everybody know where their wearer’s passions lie. Aang, Zuko, and Appa adorn these Avatar socks, which can even be mixed and matched. They’re an easy stocking stuffer with a lot of personality.

Another fashionable piece of JoJo’s Bizarre Adventure apparel that every member of Team Bucciarati would approve of, this backpack is covered with the cast of the series’ popular Golden Wind installment. Giorno, Bruno, Narancia, and the rest of Golden Wind’s cast of mischievous mafioso decorate this tasteful backpack that’s both stylish and practical. It’s perfect for filling with JoJo art books and manga volumes.

After more than 1000 episodes, there’s still no end in sight for the long-running anime phenomenon, One Piece. A cute way to honor the playful nature of Luffy and the rest of the Straw Hat Pirates is with this treasure chest cookie jar. It’s a creative piece of One Piece merchandise that strays from the norm and makes for a fun gift. Whether it’s cookies, snacks, or gold doubloons, this jar is the best way to keep your buried treasure safe. Just make sure that it’s not empty if Big Mom ever comes around.

Crunchyroll has a wide selection of anime-branded mugs that make every cup of coffee or tea taste just a little better. There are some creative mugs that feature a transforming image that’s dependent upon the temperature of its liquid. This piece of Death Note paraphernalia features the dark anime’s beloved anti-hero, Light, who gets a visit from his favorite Shinigami, Ryuk, when the temperature is just right. Crunchyroll also has a similar design that features L and the Death Note. It’s a simple item that’s surprisingly faithful to the anime’s big twists. This mug is likely to surprise even the most astute of detectives.

Dragon Ball Z is one of Crunchyroll’s most popular anime series and there’s tons of merchandise that showcase Goku, Vegeta, and the rest of the show’s eclectic characters. Most Dragon Ball fans have their share of figures, artwork, and apparel, but Crunchyroll also offers some more unique items that are subtle in nature. This striking desk lamp is modeled after Goku’s signature Four-Star Dragon Ball. It’s not ostentatious in the slightest and it makes for an effective way to read manga or illuminate a room during an anime binge session.

Demon Slayer: Kimetsu no Yaiba is one of the biggest anime to premiere in the past few years and this fancy four-piece shot glass set distills the action series down to iconic symbols and designs. Every anime drinking game or celebratory occasion is better with these specialized Demon Slayer set of glasses. While technically shot glasses, these stylish, fashionable items can be used to enjoy any beverage. Their minimalist designs are attractive enough, even without any Demon Slayer knowledge, that they can also work as aesthetically pleasing pieces of art.

Crunchyroll has no shortage of Blu-Ray, DVD, and manga collections for fans to efficiently stock up on their favorite series. That being said, those who want to acquire a ton of content at a reasonable price should check out Crunchyroll’s Blu-Ray collection of all nine seasons of Dragon Ball Z. These 291 episodes span the entirety of the formative shonen series, plus two bonus Funko Pop! figures–Imperfect Cell and Android Saga style Bulma–are thrown in for good measure. On sale for the holidays at nearly half of its original price, it’s now the best time to splurge on this special Blu-Ray boxset