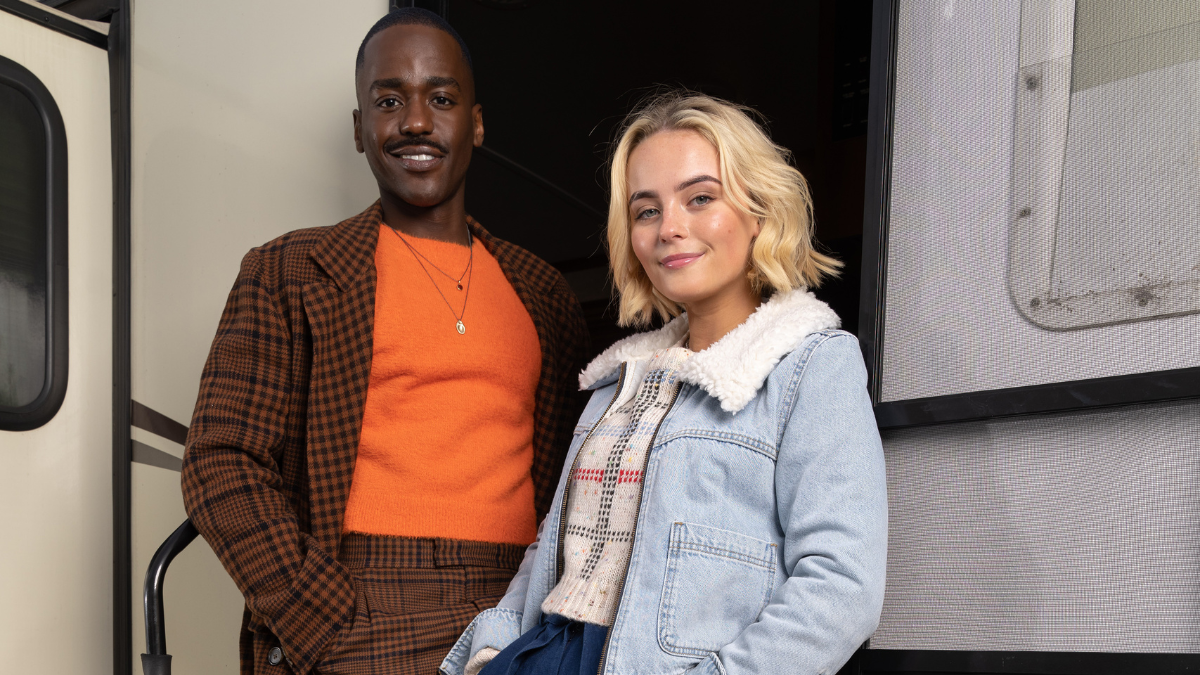 WARNING: Includes SIGNPOSTED set report SPOILERS AND RUMOURS AT THE BOTTOM OF THE PAGE.

Series 14 of Doctor Who will be extra-special as it ushers in a brand-new era in unique circumstances. In Series 13 we bade farewell to Jodie Whittaker and showrunner Chris Chibnall, and before the series finished airing the BBC announced Russell T Davies was returning as showrunner and the new Doctor would be Ncuti Gatwa.

And then the explosive Series 13 finale ‘The Power of the Doctor’ threw a big old sonic spanner in the works. When Whittaker regenerated, instead of getting a sneak peek at Gatwa as the new Doctor (as we have with all other modern Doctor Who regenerations), we got the surprise twist of David Tennant returning.

We now know that Tennant will be the official Fourteenth Doctor for the three 60th anniversary episodes, with Gatwa apparently playing Fifteen, the only hint of him so far being a two-second appearance in the 60th anniversary trailer where he shouts ‘someone tell me what the hell is going on here!’ Well quite, Ncuti.

The Series 14 news continues to trickle in, including the new companion being Millie Gibson playing a character called Ruby Sunday, Disney+ getting USA streaming rights and adding a chunk of production support, and Sony taking a majority stake in production company Bad Wolf.

As we await official announcements and the answers to many more questions, here’s what we know so far:

So far, only two cast members are known for sure: Ncuti Gatwa as the Fifteenth Doctor and Millie Gibson as Ruby Sunday.

18-year-old Gibson is best known for playing troublesome teenager Kelly Neelan on Coronation Street, a role which helped her win Best Young Performer Award at The British Soap Awards in 2022.

When her casting was announced, Gibson said: ‘Whilst still being in total disbelief, I am beyond honoured to be cast as the Doctor’s companion. It is a gift of a role, and a dream come true, and I will do everything to try and fill the boots the fellow companions have travelled in before me. And what better way to do that than being by the fabulous Ncuti Gatwa’s side, I just can’t wait to get started.’

A New Look for The Doctor and Ruby

On Saturday the 17th of December, the BBC revealed the new costumes for the TARDIS-travelling pair:

It’s a modern-yet-classy, sophisticated look for The Doctor, with the tartan perhaps giving a nod to Gatwa’s Scottish roots growing up in Edinburgh and Dunfermline, and also mirroring David Tennant’s new Doctor costume for the 60th anniversary episodes. There are hints of Matt Smith’s Glenurquhart check brown tweed jacket from his time as the Doctor, too.

A video gives further details, including The Doctor’s rings and ‘Gallifreyan nail tattoos’:

An 8-Episode Series (But No More Gap Years)

Russell T Davies revealed in Doctor Who Magazine that there would be eight episodes in Series 14 not including the Christmas special:

“The Fifteenth Doctor’s first full season will be eight episodes long, with a Christmas special, making it nine episodes every year – and when I say Christmas, that’s my generic term for festive/end-of-year/holiday or New Year, you’ll have to wait and see.”

Davies also confirmed that he’s already writing the Christmas special for 2024, and that we can expect more regular Doctor Who appearances from now on: ‘It takes a while to get the empire in shape, but that’s a serious plan: annual Doctor Who, no gap years, lots of content, on and on.’

Obviously, very little is known so far, but Ncuti Gatwa did tease that ‘there are some extraordinary storylines for this season’ when appearing on Twitter Live and revealed he’d love to take the Doctor to Nigeria to meet the Orisha, a set of gods in Nigerian mythology.

Russell T Davies also hinted in a February 2022 interview that Series 14 was going to feel very new, saying:  ‘There are things coming up that are brand new ways of telling stories that have never been done before.’ In a later interview in Doctor Who Magazine, he also teased that the opening line of the Episode Seven script read:

First Director Confirmed… and His Back Catalogue is Pleasingly Weird

So far, we know the director for the first block of filming will be Dylan Holmes Williams, a young British screenwriter who has previously worked on some very cool, creepy horror projects.

These include M Night Shyamalan’s Apple TV series Servant, about a couple who hire a nanny to look after a reborn doll, and Holmes William’s own creation, Stilts, a dystopian short about a world where everyone is forced to wear giant metal stilts until one man rebels.

Obviously Russell T Davies is writing episodes (in Doctor Who Magazine’s issue 584 he said he had ‘six episodes of the New Series’ and was starting the seventh, although we don’t know if he wrote the other six solo) but no guest writers have been confirmed as yet.

Former showrunner Steven Moffat also confirmed to radiotimes.com that Davies had shared his scripts for the new series, which Moffat dubbed ‘fantastic’, leading some to wonder whether there are plans for Moffat to contribute to Series 14. He denied it, saying it was too soon for a return for him in any form. ‘For me it feels like yesterday that I wrote Doctor Who.’

We know that the 60th anniversary specials are due in November 2023, and the BBC has confirmed Ncuti’s first episode will air “over the festive period in 2023”. Whether that will be a one-off Christmas special with another wait for further episodes or the launchpad for the new series to follow on in January 2024 remains to be seen.

Where to Watch Doctor Who Series 14

In terms of where to stream Doctor Who, Series 14 will – as ever – be shown on BBC One and BBC iPlayer in the UK, whereas in the US it will move from its former home of BBC America to Disney+.

The new partnership with Disney+ comes with extra production budget which might also mean we get even bigger stars and more epic stories. Watch this space.

WARNING: THIS SECTION CONTAINS SPOILERS FROM SET REPORTS. LAST CHANCE TO STOP SCROLLING IF YOU WANT TO KEEP SERIES 14 AS A TOTAL SURPRISE.

Russell T Davies confirmed that filming began in Cardiff on Monday the 5th of December:

While remaining in Cardiff, Series 14 filming is moving from Roath Lock Studios – the home of Doctor Who filming since 2012 – to Wolf Studios Wales, as production company Bad Wolf will co-produce the show with the BBC.

A further image revealed the TARDIS and extras in warm clothing and a Christmas hat, and Gatwa and Gibson having fun on set (warning: video contains swears):

ITV Nolly Review: Russell T Davies’ Heartfelt Tribute to ‘Difficult’ Women
HBO’s The Last of Us: The Changes to Bill’s Story and the “Parallel Universe” of TV
The only way you’ll get me to run is if a Allosaurus is chasing me.🦖 #short #shorts #scifi
Arrow Season 6 Episode 16 Review & Reaction | AfterBuzz TV
Even More DC Shows Have Been Axed at HBO Max